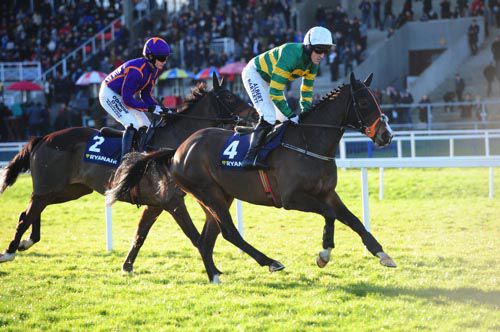 Jessica Harrington is confident Jezki is in at least as good a form as 12 months ago as he prepares to defend his crown in the Stan James Champion Hurdle at Cheltenham on Tuesday.

The JP McManus-owned seven-year-old looked capable of becoming the new dominant force in the division after following up last year's triumph by beating Hurricane Fly once more at Punchestown, but he has found Willie Mullins' brilliant hurdler too strong on each of their three meetings this season.

That was also the case last term, however, with Jezki twice beaten by Hurricane Fly at Leopardstown before comprehensively reversing the form at Prestbury Park.

"He's probably had a better year this year than he had last year in the fact that he finished closer to Hurricane Fly twice," said the County Kildare trainer.

"He's been beaten three times by Hurricane Fly this season. He's a hard horse to beat in his own country. Maybe we should have beaten him. Maybe we're not as good as we think we are, but I still think we're good.

"He hasn't really had any hard races and he seems to like Cheltenham in the spring of the year. He's a horse that likes being looked at and probably enjoys the attention horses get at Cheltenham.

"As long as we have good, safe ground, I'll be happy. It will be a good race. I think it's very competitive this year. I thought last year's Champion Hurdle was tough. Every year you go there it's never going to be an easy race.

"Is it a better race this year on the ratings? I don't know."

The chief hope for the home team is undoubtedly The New One, who left connections wondering what might have been after he was almost brought down by the fatally-injured Our Conor in last year's renewal before flying up the famous hill to finish third.

The seven-year-old is unbeaten in five starts since then, and though he was far from impressive on his latest start at Haydock, trainer Nigel Twiston-Davies believes his charge has what it takes to beat the raiding party.

He said: "The New One has done brilliantly this season.

"He and Faugheen haven't been racing against championship horses, they have been beating also-rans very well - the one who sticks out is Hurricane Fly who has beaten good ones.

"It was terrible ground at Haydock last time and The New One was following a horse who was jumping to the right. When Sam (Twiston-Davies) asked The New One to quicken, it took a little time but away he went away as usual, despite hating every minute of it.

"You could argue The New One was 6lb below his best at Haydock on ground he positively hated. We won't be allowing Faugheen out of our sights.

"The New One quickens off any pace but there is no way we want the other horse to go off 10 lengths in front.

"Faugheen has done brilliantly but we can do as good. I think they should be joint-favourites.

"Faugheen is always going to be impressive because he takes up the running far earlier than we do.

"The New One lost eight to 10 lengths in the race last year and was stopped and had to start again. It is really hard work to do that. He was brought to a standstill and had to pick himself up and carry on."

Like Jezki, Kitten Rock carries the colours of McManus and has earned his place in the field with four successive victories.

Noel Fehily has been booked for the ride in the absence of the sidelined Mark Walsh.

O'Grady said: " It is a very interesting race, as always. I'm hoping he'll be in the money and the more money he picks up the happier I'll be.

"I'd like to see a bit of rain, but the ground is always very nice on the first day. I would expect good to soft ground, which would be quite nice."

Nicky Henderson has saddled a joint-record five Champion Hurdle winners, but is under no illusions about the task facing Vaniteux, who has filled the runner-up spot on three starts this term.

"Vaniteux will have his ground. He's not going to win, but he's got nothing else on until next year when he goes novice chasing," said Henderson.

" We tried him over a trip, but that didn't work. I suppose in some ways we should have waited until the two-and-a-half-mile race at Aintree. Good ground would be important to him and he has not had it this season."

The field is completed by Dan Skelton's Bertimont, who will be a three-figure price despite giving The New One a fright at Haydock.

Jockey Harry Skelton, the trainer's brother, said: "He's going to be a big outsider, but he's been running well all season and got pretty close to The New One at Haydock last time.

"He's only a small horse so we don't want him to in handicaps with top weight and he deserves to take his chance.

"He goes on any ground and if he can pick up some prize-money we'll be delighted."