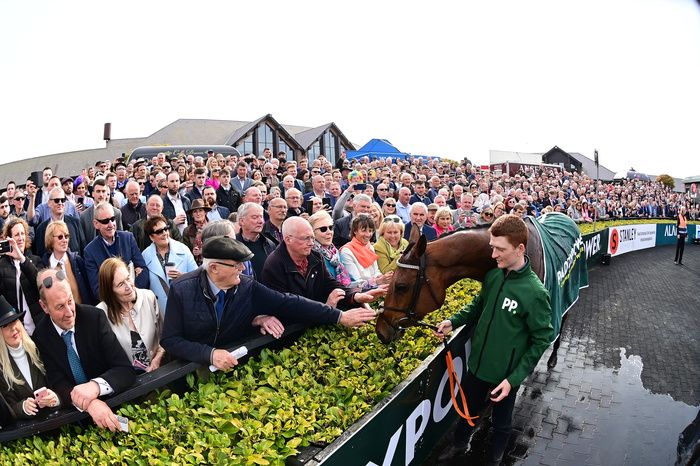 If you are new to horse racing, the jargon and terminology used by racing professionals and enthusiasts may seem endless. However, if you arm yourself with a few racing and betting terms you will be talking the lingo in no time. Our betting guide pages will help you to learn all about types of bets, how to bet and how to pick a winner.

SP refers to a horse’s starting price. This is the price at which a horse goes off at the start of a race. The SP is used to determine the payout on a winning horse unless you take a specified price.

An each-way bet is betting on a horse to win and to be placed.

A nap is considered a tipster’s strongest selection in a race.

Pulled up is when a horse and rider no longer continue in a race, usually due to tiredness or injury.

Handicap is a mark allocated to a horse and defines the amount of weight the horse must carry in a race, in accordance with its rating. Horses are allocated a handicap mark after three runs by the handicapper.

A horse’s previous race results. These are detailed next to its name in a racecard. The form is read from right to left.

Place refers to a horse who finishes 1st, 2nd, 3rd or 4th plus extra places for big-field races.

The amount of weight a horse must carry in a race.

If a horse has been syndicated, it is owned by a racing syndicate. Each owner buys a share or shares in the horse.

Ante post is a bet which refers to placing a bet earlier than the declarations for a race.

Non-runner is when a horse is withdrawn from a race for which it has been declared.

When a race meeting is called off, most commonly due to adverse weather. If you have placed a bet at an abandoned meeting, your bets will be refunded.

The age of a horse. This is detailed on the racecard.

An artificial racing surface suitable for all weathers.

This refers to a weight allowance for the jockey. Inexperienced and young jockeys are permitted to carry less weight - 3lb, 5lb or 7lb. The weight they carry increases in accordance with the number of winners they ride.

Headgear worn by a horse in a race which has cups to fit around the horse’s eyes. Blinkers are designed to help horses concentrate in races by limiting their vision.

A Listed, Group or Graded race. A horse who is placed in one of these races is referred to as a ‘black-type’ horse.

The area in which on-course bookmakers are located at a racecourse.

This refers to the breeding sector of the horse racing industry.

When a horse has no room to manoeuvre during a race due to being blocked by other horses.

A piece of equipment worn over a horse’s head that helps the jockey to steer and control the horse.

A thoroughbred mare who stands at stud for breeding purposes.

When a horse falls due to being hampered by another horse during a race.

A flat race run on a National Hunt card in preparation for a horse’s first run over obstacles.

A race run over steeplechase fences.

A sheepskin strip attached to either side of the bridle to limit a horse’s vision and to help it to concentrate during a race.

An inexperienced National Hunt jockey who is permitted to carry less weight in a race. The weight claim is reduced as they ride more winners.

Clerk of the Course

The person responsible for the management of the racing surface at a racecourse.

People connected to a horse, including the trainer, jockey and owner.

A horse is demoted by stewards due to breaking the rules of a race.

The position of a horse in the starting stalls at the start of a Flat race.

The horse with the shortest odds for a race.

The number of horses in a race.

A horse who takes the lead or is close to the lead during a race.

The distance of a race is measured in miles and furlongs. A furlong equates to an eighth of a mile.

Gallop is the fastest gait of a horse and all races are run at a gallop.

A male horse who has been castrated.

Refers to the ground conditions in a race. The going can be described as anything between firm and heavy.

Top level contests are Group 1 races on the Flat and Grade 1 races in Jumps racing. The next levels are Group/Grade 2 and Group/Grace 3.

An industry professional who allocates a horse’s handicap mark and how much weight it will carry in a race.

A piece of equipment worn over a horse’s head and ears to limit the noise of a race day.

The smaller of the two obstacles in National Hunt racing.

Refers to any occurrence during a race.

The finishing distance between horses in a race is measured in lengths. A length is measured from a horse’s head to a horse’s tail.

A high-class stakes race below a Group/Graded race.

A horse is described as a ‘maiden’ when it has not yet won a race.

A measurement used in a tight finish. A horse ‘wins by a neck’.

An inexperienced horse who has only won one or two races.

A handicap race for two-year-old horses on the Flat.

When a horse is no longer travelling through a race without having to be pushed along by the jockey.

When a horse is travelling through a race nicely.

When a horse travels at the same pace through a race without quickening.

A fence with a large ditch in front of it.

Also known as the ‘paddock’ this is where horses parade at the races prior to the race.

Additional weight that must be carried by a horse, if it has won a race before receiving its new handicap mark.

A tight finish will be officially decided by a raceday judge, who will analyse a photo of the horses crossing the line.

A programme which contains all the details of the runner and riders alongside race times and race day information.

A horse who runs in the fastest and shortest races on the Flat. These races are run over five and six furlongs.

A male horse over four years of age who has not been castrated and is often used for breeding.

A race-day professional who starts the race.

The starting stalls used at the beginning of Flat races.

A horse who runs over 2 miles on the Flat and over 3 miles over Jumps.

If rules are broken in a race, the race-day stewards will hold an inquiry and consider whether the horse(s) should be demoted.

A strap placed inside the horse’s mouth to tie down its tongue while racing, to help it breathe.

The most common breed of racehorse.

When a horse shows a marked change of speed in a race to win.

A piece of equipment worn over a horse’s head that limits its sight, similar to blinkers but with an additional slit in the cups around its eyes. This helps the horse to concentrate.

When all jockeys have weighed in to check the scales and ensure they carried the correct weight during the race.

There is plenty more advice and guidance on horse racing, types of bets and betting terminology available to you here. Check out our other pages: