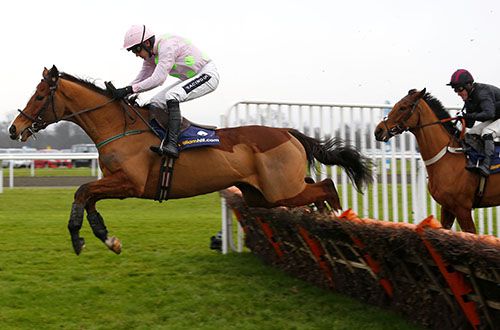 Faugheen spearheads eight declarations for the Stan James Champion Hurdle, the highlight on the first day of the Cheltenham Festival on Tuesday.

The Willie Mullins-trained seven-year-old has dazzled since his transfer from France to Ireland and will be ridden by Ruby Walsh.

Walsh also had the option of riding the record-breaking Hurricane Fly, who won the Champion Hurdle in 2011 and 2013, but Mullins' exceptional 11-year-old will be partnered by Paul Townend.

Mullins also saddles Arctic Fire, who has twice been defeated by Hurricane Fly this term. Danny Mullins, the trainer's nephew, has been booked for the ride.

Jezki, last season's champion hurdler, is back for another go and is the intended mount of soon-to-retire legend Tony McCoy.

The New One, considered by many to have been unlucky not to have won the race 12 months ago, is Britain's big hope and went unbeaten this winter.

In addition to Jezki, owner JP McManus throws another dart at the board in the shape of the Edward O'Grady-trained Kitten Rock.

Dan Skelton has high hopes of a big run from Bertimont, while Nicky Henderson, who has won the Champion Hurdle a joint-record five times, is responsible for Vaniteux.