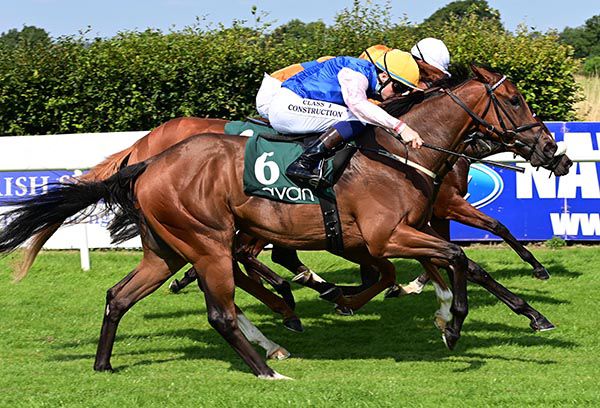 Eriskay nabs them on the outside
© Photo Healy Racing

Eriskay came out on the right side of a four-way thrust for the line in the extended five furlong juvenile fillies' maiden at Navan.

Oisin Orr's partner was sighted making headway in sixth a furlong and a half down. She stormed into contention on the outer inside the final furlong and put her head on the line to get the verdict.

The Profitable filly pipped even-money-favourite Sablonne by a short head. The runner-up was the same distance in front of Brostaigh (8/1). Siesta Beach was just a head further away out of the places.

Dermot Weld said: “It was very close! She's a gorgeous filly, she's homebred and is the first foal out of a mare from a nice family we have. It's a nice start for the mare.

“We'll have a crack at a Listed or Group race with her next. She just got up there and needs to go seven furlongs. She showed the speed to win over five-and-a-half there but ideally seven would be her trip.

Eriskay has improved on each of her three runs - she started her career with a fifth In Naas before finishing fourth at the Curragh last weekend.

The Stewards interviewed S. Foley, rider of Sablonne (GB), concerning his use of the whip in the latter stages of this race. Evidence was heard from the rider concerned. In his evidence, S. Foley stated that his mount was not doing a lot in front but admitted that he miscounted his use of the whip in the competitive finish. Having viewed a recording of the race and considered the evidence the Stewards were of the opinion that S. Foley was in breach of R10(3)(g) by using his whip with excessive frequency. Having taken his previous record into consideration, the Stewards suspended S. Foley for one raceday.