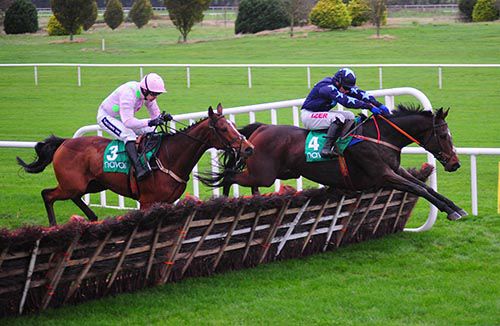 Hidden Cyclone ran out a gutsy winner of thetote.com Fortria Chase at Navan.

Shark Hanlon's stable star appeared to be struggling when Flemenstar stretched a couple of lengths clear heading to three out, only for the leader to plough through the fence.

That allowed 3-1 shot Hidden Cyclone to regain the initiative and although he made a tired mistake himself at the last, he had enough in reserve to hold off the staying-on Days Hotel by six and a half lengths.

Victory in the feature completed a double for jockey Brian Hayes and owners the Mee family after the John Kiely-trained Ancient Sands (7-1) showed his appreciation for the return to timber by coming out on top in the St Johann Ski Resort Tirol Austria Handicap Hurdle.

A regular at the highest level last term and second in the Champion Hurdle at Cheltenham, Willie Mullins' gelding had to work to do heading to the final flight but jumped it better than leader Monksland and showed a superior turn of foot on the run-in to prevail by half a length.

Three Stars has been put in his place by a couple of exciting Mullins prospects but gained his revenge by relegating the champion trainer's Thomas Hobson into second in the At The Races At Navan 'For Auction' Novice Hurdle.

Henry de Bromhead's 12-1 chance took up the running approaching the second-last and kept going to land the Grade Three by two and a quarter lengths, with odds-on favourite Tycoon Prince a disappointing third.

High-class hurdler Kitten Rock was keen in the early stages of the Crystalski.ie E.B.F. Beginners Chase but ultimately ran out a cosy winner as the 4-6 market leader.

Redclue (10-1) defied top weight with an authoritative display in the Join Navan Members 2016 Handicap Hurdle, while Beyond The Obvious was an impressive winner of the Racing Again Troytown Day 22nd November (Pro/Am) Flat Race.