Stockdale benefits from step up in trip 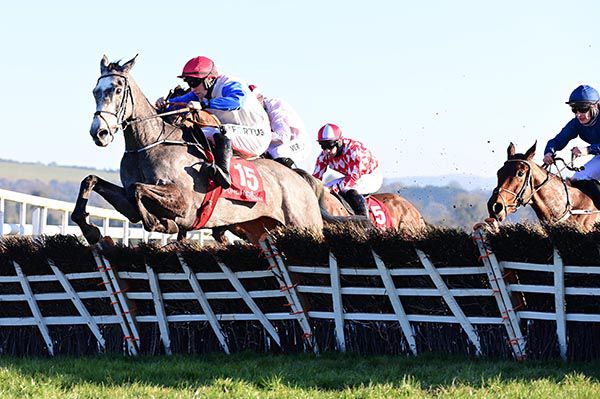 Stockdale up and over the last
© Photo Healy Racing

Stockdale was a 50/1 winner of the mares' maiden hurdle in Punchestown for Brian Hamilton and Jonathan Moore.

The five-year-old daughter of Court Cave fiddled her way through the fourth last, but was noted making headway on the outer at the next which she jumped much better.

She stayed wide and moved into contention at the penultimate hurdle. The grey then travelled well for Moore in grabbing a narrow lead before the last.

She was swift over it and went for home but faced a stern challenge in the closing stages as Merry Doyenne flashed home to close to within a neck.

Merry Doyenne was gambled on from 16/1 to 17/2. She was two and three quarter lengths in front of 4/6 favourite Humble Glory.

This was a step up in trip to an extended two miles six furlongs for Stockdale who was third over two and a half miles at this venue in January.

Moore said: “She ran well here the last day and took a big step forward from Leopardstown [when ninth to Gaillard Du Mesnil in December]. I thought the trip would suit but that it might be too hot a race on paper.

“I went very wide the whole way - I thought I was too wide, but it probably ended up being the best position as it was lovely fresh ground. In fairness to the mare she toughed it out and hopefully she can continue to progress in the future.”

Brian Hamilton added: "She has just improved with every run. The last day she ran here she was a wee bit novicey jumping. She jumped a bit better there today.

"Bit further just helped with her jumping. Even though her price said 50/1 we did expect her to run respectable. I thought she would finish closer to Gordon's mare (Humble Glory) but I wasn't expecting her to win to be honest.

"Her jumping was a bit slicker there today and the trip has obviously helped her too.

"Jonny was saying the ground wasn't just as dead as you might have expected. He rode wide the whole way which was probably a help to her too. I think she would be better on a wee bit of better ground."