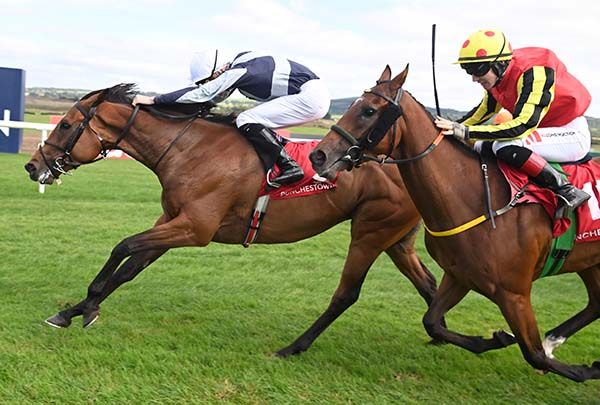 Dundalk barrier trial winner Saturn Five made the breakthrough on turf in the median auction maiden over 1m1f at Punchestown.

This was his second racecourse start having shown up well in third at Roscommon towards the end of last month.

The 6/5 favourite was slowly away and stumbled leaving the stalls but was soon pushed up on the inner by Shane Crosse to be prominent.

He was a close second to Princess Ameerah after half a mile and led narrowly three furlongs out.

There were plenty of horses boxing away in behind as the field straightened for home but Saturn Five wasn't for heading and kept up the gallop to close the race out by half a length from Zoffman (7/2). Six Magpies (33/1) kept on for third, a length further back.

Assistant trainer Brendan Powell said: “He said he fly-leapt a bit coming out of the stalls and lost a couple of lengths.

“He said he's tough and hardy but he still feels there is plenty more to come out of him.

“He's a big horse and he's still green. He was good and strong on him, he hung right the last time but was straight as a gun barrel today.

“He brought him up this side of the track where the ground is probably a bit better, it's chopped up on the inner.

“He did it well. Where he goes now I don't know but I still think there is a lot of improvement in him. He looks like a big baby and still gallops like that. That would be his minimum trip.”