Ryan fires in another winner with Fairyhill Run 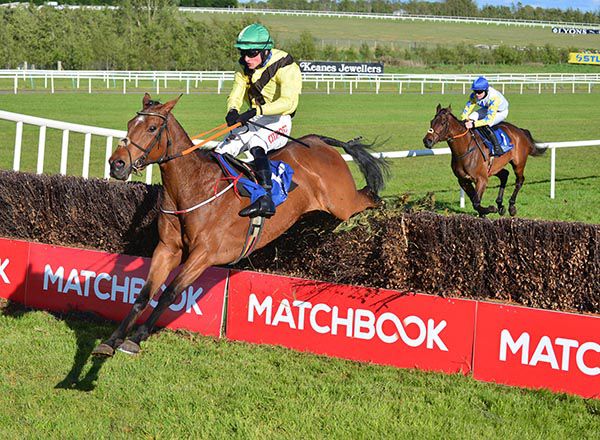 John Ryan continued his profitable May when saddling a one-three in the Patrickswell Beginners' Chase at Limerick as Fairyhill Run (3/1f) took the honours.

The six-year-old mare won a battle for the lead with Thegoaheadman after the first fence and the pair had the field well spread out.

Thegoaheadman began to struggle four out and was passed for second by Fill The Tank. The latter was urged along to close on Fairyhill Run approaching the home straight with the pair a long way clear.

Danny Mullins had got breathers into Fairyhill Run and the mare popped two out and cranked up the pressure on Fill The Tank.

Once she jumped the last, the race was in the bag as she won by a more than comfortable nine and a half lengths.

Fill The Tank had no more to give in second at 9/1 and was 15 lengths in front of Fairyhill Run's stablemate, Nymphhall (66/1), who came from a long way back.

Ryan said: "That is a really good mare. She was only beaten a nostril in a Listed hurdle here and was very unlucky not to win, but she is way better over fences. She is a big scopey mare and (stablemate) Waitnsee will have to watch out.

"She is a fast jumper, is well able to gallop and will run in all those black-type races for the summer. I think that's her trip (2m6f).

"We have a bunch of real good mares and only Willie Mullins and Gordon Elliott trained more winning mares than I did last season.

"There is a lot of hard work put into this and we're also beef and sheep farming. We've 50 horses in training, 30 in strong training and 20 young horses coming along."

This was Ryan's sixth winner of the new National Hunt season.