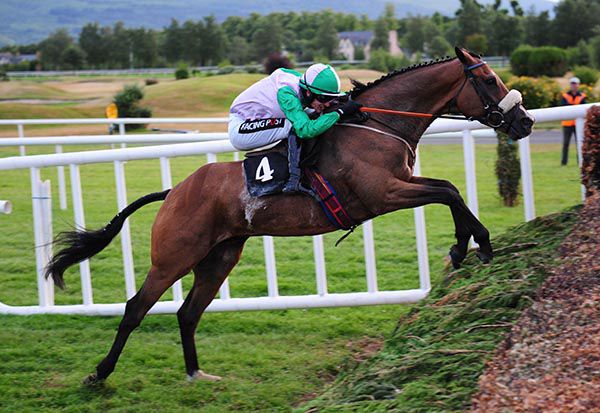 Camlann on his way to victory in Killarney
© Photo Healy Racing

Camlann brought up a double for jockey Danny Mullins when he obliged at 25/1 in the concluding novice chase at Killarney.

The seven-year-old gelding swept through to lead at the penultimate fence and was full of running as he came in by four lengths from the gambled-on Le Martalin (8/1 to 5/1).

Robin Des Foret, the even-money favourite, jumped less than fluently and finished third. Danny Mullins said: "We were a bit disappointed when he was beaten the last day but he had the hood on him and he is getting older and I think stepping up in trip was a big help to him.

"Michael Mee and the Shark (Hanlon) have done a good job with him and he ran in Galway three times last year and performed better each day.

"I'd say they'll plan towards there and he now has plenty options."