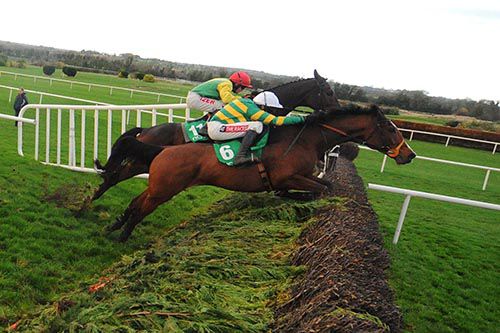 Kitten Rock, near side, jumps the last with Sizing Titanium
© Photo Healy Racing

All eyes were on Kitten Rock in the beginners' chase at Navan and Edward O'Grady's charge didn't disappoint on his chasing debut as he took the honours from Sizing Titanium.

As a hurdler, he was successful up to Grade Two level before being beaten less than 10 lengths into sixth in the Grade One Champion Hurdle by Faugheen.

He was sent off the 4/6 favourite for today's assignment. Barry Geraghty, in the JP McManus colours, was content to track Sizing Titanium throughout.

He jumped into a narrow lead upon landing after the second last but Sizing Titanium's race was far from run. The latter was back on terms as the pair jumped the last but when Geraghty bustled his mount along on the run-in, Kitten Rock responded in the closing stages to pick up the win by a length and a quarter from the 7/1 shot.

Peoples Park went into many a notebook as he took third at 33/1 on his first appearance for 245 days. He was beaten eight and three quarter lengths by Kitten Rock.

Edward O'Grady said: "I'm greatly relieved as he's not done one piece of work. He's so much heavier this year, and the ground has not been soft enough to do anything. I was on tenterhooks.

"Hopefully that is the start of a very good campaign. There is a race for him back here in four weeks time (Grade 3 Klairon Davis Novice Chase)."