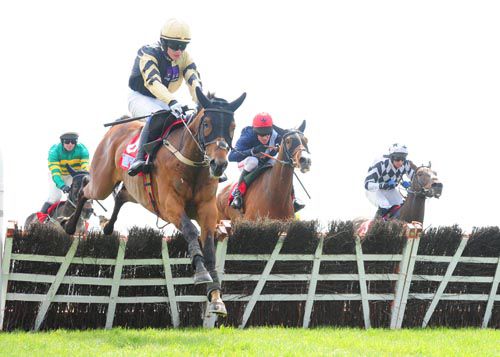 Ivan Gronzy just held off the late surge of Kitten Rock, as he landed the Grade 3 Tayto Hurdle, the opener at Fairyhouse on Grand National day, for Willie Mullins and Paul Townend.

The Andrea & Graham Wylie owned gelding finished a disappointing twelfth in the Fred Winter at Cheltenham on his last start, and he was sent off a 5/1 chance (opened at 6/1 on-course) for this two mile contest.

Turning for home he was travelling smoothly under Townend, and he got a lovely run through on the inside approaching two out, and he soon hit the front.

He went a couple of lengths clear before the last, and he kept on well under pressure from there, just holding off the late surge of Kitten Rock (3/1) and Barry Geraghty by a head.

Lindenhurst (8/1) finished a further three and a half lengths back in third under Mark Bolger for John McConnell, while Clarcam, who was sent off the 5/2 favourite, was a further half a length back in fourth under Noel Fehily for Gordon Elliott.

Willie Mullins said afterwards: “I think the chiffony (type of bit) and the hood made a big difference to him. Also the fast ground and they went a faster pace so it was easier to settle him.

"He is starting to look like the horse we thought he was earlier in the season.

"I don’t know whether Punchestown will come too soon, we will see how he comes out of this.

"He is not a chaser, whether he goes back to the flat or not I don’t know but he is an out and out hurdler. He hasn’t got the scope to jump fences."