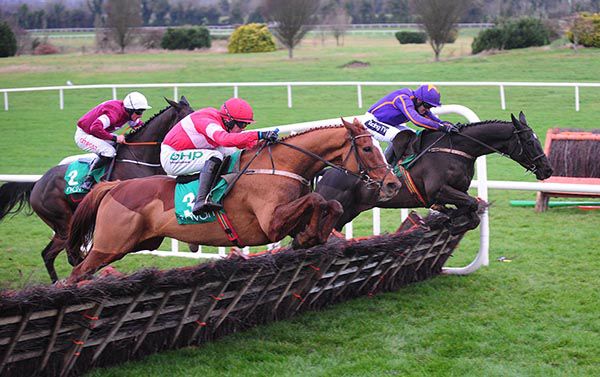 Easy Game fought off the attentions of stable-mate Getareason to land back-to-back graded successes at Navan.

The Willie Mullins' gelding lunged late to snatch a Grade 3 victory in the Monskfield Novice Hurdle three weeks ago and was again held up in today's Grade 2 contest.

Ruby Walsh asked his mount to take closer order on the inner jumping the third last but had to pull his mount inside a rail soon after that to keep him on course.

The field came tight at the penultimate flight and Easy Game had to be brave to come between horses, hitting the front before the last.

Stable-mate Getareason had a clear passage on the outer and jumped up to join Easy Game at the last but Walsh had a willing partner on the run-in as the 4/1 shot asserted close home for a two length success.

Defi Bleu was sent off the 3/1 favourite and having held every chance before the last he eventually finished third, four-and-a-quarter lengths back.

“Ruby met with a lot of interference so it just goes to show how brave the horse is,” said Mullins.

“That’s his sixth run this campaign and his fourth win. He’s a horse that has gone a bit under the radar with us.

“I didn’t dream he would be this successful, and he’s improving all the time. He’s had a tough season for a four-year-old.

“Normally we go from this race to the Lawlors race in Naas but this horse has a different profile than previous winners of this race that we’ve had. We’ll see how he comes out of this but he keeps surprising me and getting stronger and better.

“I was delighted with Getareason. He jumped slow but he jumped a lot better than he did the last day, and he showed that he’s got an engine. He should be up to winning Graded races on that run, and maybe he could go further.”

Paddy Power shortened the winner into 20/1, from 33/1, for the Ballymore Novices Hurdle at Cheltenham.