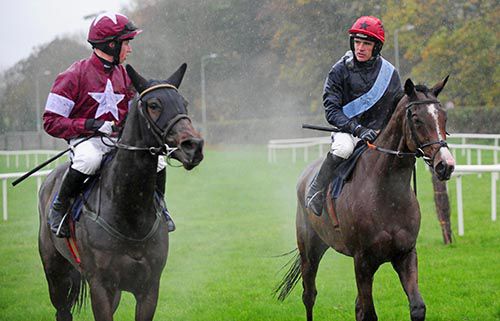 Kitten Rock ran out an impressive winner of the feature at Naas this afternoon, the Grade 3 Fishery Lane Hurdle, scoring under Ruby Walsh for Edward O’Grady.

The French import won his first two starts over hurdles in March before going down by a head in the Grade 3 Tayto Hurdle at Fairyhouse in April.

He rounded off last season by finishing a good fourth to Abbyssial in the Grade 1 AES Champion 4YO Hurdle at the Punchestown Festival.

He proved friendless with punters today and having opened at 9/4 on-course he drifted all the way out to 7/2 at the off.

Settled in third the son of Laverock improved to challenge turning into the straight and hit the front at the second last.

He was ridden out on the run-in going on to score easily by seven and a half lengths. The well-backed Henry Higgins finished second at 7/2 (9/1 last night and from 9/2 on-course) under Mark Walsh for Charles O’Brien.

Analifet, who injured her pelvis when last seen at Leopardstown on St Stephen’s Day, was sent off the 4/5 favourite.

She attempted to make all under Bryan Cooper but faded tamely when headed two out, finishing last of five runners.

“We think he's nice but I don't know where we will go now. It's very difficult with a four-year-old in their second season.

“I wanted to see what would happen today and although he might not be able to ride again I'll wait and see what the jockey says.

“I thought he would have to be good today to win as although he was well fit enough to run there is loads of improvement in him and he gave a right good blow.

“Ruby was impressed with his jumping and down the line I see him as a Grade 1 chaser hopefully as he's just shy of 17 hands.

"How high he goes at this game I don't know but I'm just delighted to have him.”

STEWARDS REPORTS B.J. Cooper, rider of Analifet (FR), trained by W.P. Mullins, reported to the Stewards' Secretaries that his mount tired on the ground in the latter stages. The Turf Club Veterinary Officer examined Analifet (FR), trained by W.P. Mullins, at the request of the Stewards and reported the animal to be post race normal.