Easy for Kitten as Abbyssial crashes out 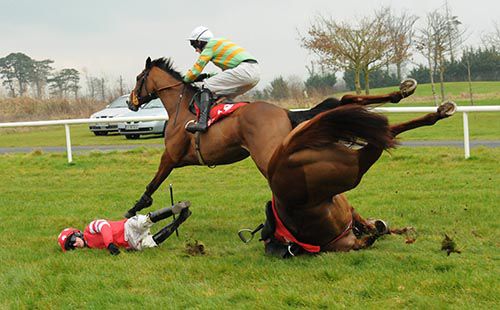 Kitten Rock was left to come home a facile winner of the Red Mills Trial Hurdle after a crashing fall by Abbyssial two from home in the Grade 2 contest at Gowran this afternoon.

The hotpot's stable-mate Sailors Warn cut out the early running in the two-miler before Tiger Roll took over at halfway.

Kitten Rock moved onto the leader's girth three from home and the 4/7 took a narrow advantage entering the straight.

Edward O'Grady's charge was soon tackled by Abbyssial, however, and the pair both travelled well going to the penultimate flight.

They were upsides when Paul Townend's mount took a heavy fall from which he thankfully got up quickly.

Kitten Rock soon skipped clear and Mark Walsh didn't have to get serious to record a 12-length success.

Thunder Zone plugged on to take the runner-up spot ahead of his stable-mate Tiger Roll.

"He was very relaxed today and never turned a hair beforehand but Mark said he came alive at the second last and he was delighted," said O'Grady.

"I'll have to chat with JP and Frank (Berry) to see what they want to do. The plan is to have one more run this season, and it will either be the Champion Hurdle or the Ballybin Hurdle (Grade 2) at Fairyhouse on Easter Monday.

"They usually have some ease in the ground on the first day at Cheltenham. He did a bit of work on good ground the other day before the rain came and I was thrilled with him, although I wouldn't say he'd want fast ground.

"He's gone through the gears this season winning a Listed, Grade 3 and now a Grade 2, so it's logical to keep going.

"I look at him as a chaser for next season."

Walsh told Attheraces: "It's hard to know (what would have happened). I was talking to Paul and he said he would have given me a race but I was cantering.

"I wanted a lead and wanted Bryan (Tiger Roll) to bring me a bit further but he was running away so I let him roll on down.

"Paul's lad made a mistake and I was left in front a long way and he was just idling in front.

"I was a bit worried going to the start as he was lobbing down and usually he's in your hands. He's learning with every run and he's been a lot more professional. He's settling away and I was happy with him.

"In the Grade 1 at Punchestown last year at the end of the season the ground was good to yielding. He was fourth and ran well and I would have no problems with him running on better ground.

On Champion Hurdle aims Walsh added: "He'd have to improve a lot again to be up there facing those sort of horses.

"I'll leave it up to Frank (Berry), JP (McManus) and Mr O'Grady to see what they think."

The winner remains a 25/1 shot with both Boylesports and Paddy Power for the Champion Hurdle.