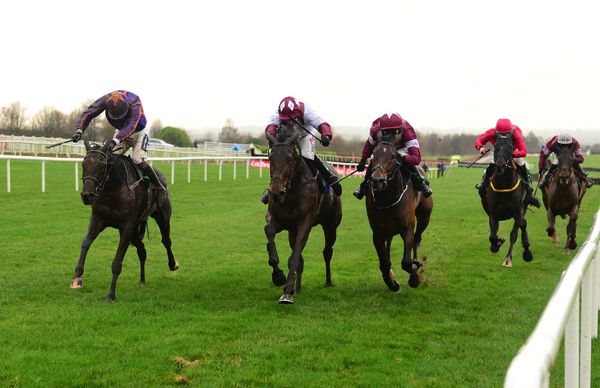 Easy Game bids to provide Willie Mullins with a seventh victory in the Navan Novice Hurdle on Sunday.

Subsequent Cheltenham Festival hero Mikael D’Haguenet became the champion trainer’s first winner of the Grade Two contest a decade ago and he has since struck gold with Boston Bob (2011), Pont Alexandre (2012), Briar Hill (2013), Bellshill (2015) and last year’s winner Next Destination.

Easy Game has won three of his five starts since arriving in Ireland, most recently claiming a narrow success in the Grade Three “Monksfield” Novice Hurdle three weeks ago.

The four-year-old renews rivalry with the second and third, Magnium and Choungaya, and the trainer’s son and assistant Patrick Mullins is keeping his fingers crossed Easy Game can confirm the form.

“He was only a narrow winner, so it’s hard to be confident he’ll confirm the form with the second and third, but we hope there’s some improvement there.”

Mullins has a second string to his bow in Getareason, who was last seen finishing fourth behind stablemate Robin De Carlow in a Listed heat at Cork.

“Getareason has been a little bit frustrating. He’s a horse with a lot of ability, but he has thrown in a couple of below-par runs,” Mullins added.

“We’re hoping he can bounce back from Cork and get back to the sort of form he was showing in Listowel, when he looked like he was going to win until making a bad mistake at the last.”

Gordon Elliott has saddled No More Heroes (2014) and Death Duty (2016) to claim this prize and has three chances this year.

Course and distance winner Defi Bleu is joined by Monbeg Worldwide — who registered successive wins at Fairyhouse in November — and Satoshi.

Joseph O’Brien fires a twin assault with Choungaya and and Rhinestone both declared.

The latter steps up in class after beating several subsequent winners — including Aintree bumper winner Getaway Katie Mai — at Galway in October.

Bowe said: “The Galway form has been well boosted and we’ve been happy with her since.

“We’re probably putting her in at the deep end, but we want to go where the ground is safe.

“If she could be placed we’d be delighted.”