Codd now the Leader by two 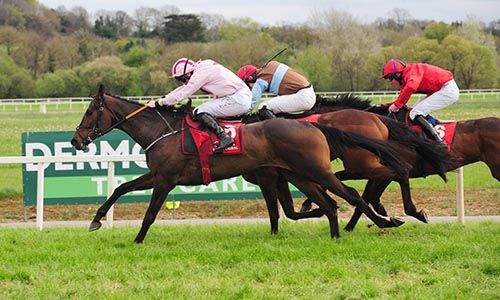 Jamie Codd moved two ahead of Patrick Mullins in the race to be crowned Champion Amateur (37-35), as he completed a treble at Cork, taking the last, the Cork & Waterford Mares Point-to-Point Flat Race, aboard Lackaneen Leader.

Codd was earlier successful aboard Sizing Solution and Double Portrait, while he also rode the opening winner (Special Prep) at Stradbally point-to-point for his brother Willie.

Lackaneen Leader is trained by Gordon Elliott, and he was completing a double on the card, having took the previous contest with Double Portrait.

Previously trained by Ken Budds, and successful on her last start at Lismore, Lackaneen Leader was subsequently sold for 40,000 pounds at Tattersalls in March.

Making her debut for Elliott this afternoon she was sent off the 5/4 favourite in the colours of owner Caren Walsh.

Settled in mid-division, she was ridden in fourth two furlongs out and stayed on best inside the final furlong, getting up in the final 50 yards, going on to prevail by a neck.

Kings Dolly (8's to 5's on-course) had to settle for second under Finian Maguire for Roger McGrath. She too stayed on well, but couldn't match the winner.

The well-backed Nana Joan (12's last night, returned 9/4) was another three parts of a length back in third under Declan Queally. She hit the front with over two furlongs to race, but couldn't last it out, and dropped to third close home.

Olly Murphy, Gordon Elliott's assistant, said afterwards: "We're very lucky to have a good fella (Codd) on their backs today - he's different gravy and to have him on your side and also working for the operation is brilliant.

"Jamie had a change of plan as late as 11.50am yesterday (ten minutes before final declarations) and decided to come here instead of riding Samcro at Fairyhouse. That took courage and was a bold move because it meant getting off a 4/6 shot (Samcro) to come and ride in a hunters' chase and two bumpers.

"He's a massive part of the team and we'll do everything we can to get him over the line now."

Regarding Lackaneen Leader, he added: "She's similar to Double Portrait (stablemate and winner of the previous bumper) in that she's a staying mare and will improve with a summer's grass.

"She is very much a mare who wants a trip."