Champion performance from Epatante in day one highlight 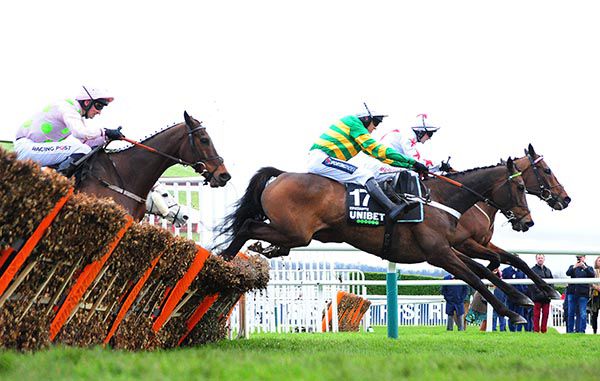 Few would have marked the six-year-old down as a likely contender for the two-mile hurdling crown following an abject display in the Mares Novices’ Hurdle at last year’s Cheltenham Festival.

However, after following up a sparkling seasonal reappearance at Newbury with an equally impressive success in the Christmas Hurdle at Kempton, the JP McManus-owned mare was sent off the the well-supported 2-1 favourite.

Always travelling well in the hands of Barry Geraghty, Epatante loomed into contention before taking over the lead from Darver Star at the final flight.

Sharjah came from a long way back to throw down a challenge on the run-in, but Epatante never looked in serious danger of being caught and passed the post a facile winner — much to the delight of the majority of the crowd.

Henderson was completing a double on the day, having earlier landed the Supreme Novices’ Hurdle with Shishkin, and is once again the winning-most trainer in Festival history with 66 winners, one clear of Willie Mullins.

The Seven Barrows trainer handler said: “She was always travelling quite well, I was always pleased with where she was. Barry gave her a beautiful ride, he always just had it covered. She has the gears.

“I’ve got to say I was worried after last year when she didn’t run well in the mares’ novice. She fell to pieces afterwards, she went home to Martinstown (in Ireland). I sent her back looking awful and she came back looking fantastic.

“We’ve been very lucky to have these sorts of horses. If you think about it it, JP should have had last year’s winner in the race (Espoir D’Allen) and Buveur d’Air is back at Martinstown with a hole in his foot. So this (Epatante) should have been his third string.

“Fair play to JP and his team, you know what he puts into it.”

Geraghty said: “She travelled great. I was a little concerned about the ground, but she was jumping where I wanted her to.

“My plan was to play her late and it worked out perfectly.

“Nicky’s done an amazing job with her, she’s flourished from Christmas to today. There’s no better trainer of a champion hurdler.

“She got lit up her last year. Today she had the ear plugs and it worked out.

“She’s really filled the void. JP could have had last year’s winner and a previous two-time winner, yet through one thing or another neither were here today and yet he’s still won it. He deserves it — he puts so much into the game.”

Patrick Mullins would like another go at the winner on better ground at Punchestown.

He said: “Down the back straight he wasn’t in love with the ground, but once I pulled him out and he started to pass horses he began to enjoy himself.

“Running down to the last for about 10 strides I thought we might win, but I knew I needed them to stop in front and the mare was the only one who picked up.

“The tongue strap helped him and he’s a bit older now so he handles the ground a bit better. He’s run a blinder and I wouldn’t mind another crack at her at Punchestown on good ground.”

Willie Mullins said: “It was a tremendous run from Sharjah on that ground, I’m really pleased with him. When it rained last night we thought his race was over, but Patrick had a plan and it worked so we’re pleased.

“Cilaos Emery also ran well. I took him back to hurdling from chasing so to finish in the first four, I don’t think we’ve any excuses, for either horse.”