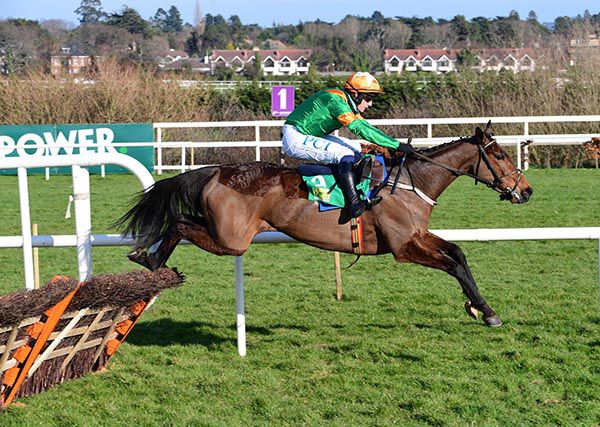 A nine-year-old at this stage, the successful daughter of King’s Theatre showed a lot of talent on the Flat where she is currently rated 94.

For Willie Mullins and Paul Townend here, on her second outing over hurdles, she easily beat Sweet Street and Erins Benefit by five and a half lengths and seven lengths.

Royal Illusion was never far away and it was a case of barring accidents once she took over two out.

After a steward’s enquiry the placings of the fourth and fifth home, Moonlit Wings and Mare Quimby, were reversed, after interference before the last.

“It’s not too often we have a nine-year-old winning a maiden hurdle,” said Mullins.

“She’ll race over hurdles for the spring and then back on the Flat later in the summer.

“Paul said the ground was a huge help to her, and I’m looking forward to the spring Festivals with her.”

Evidence was heard from the riders concerned.

S.W. Flanagan stated that that he was travelling well when going for a gap on the inner but it disappeared some strides before the hurdle.

R.J. Condon stated that despite shouting to keep daylight, his gap disappeared from his outside.

J.P. O'Sullivan stated that the pace steadied in front of him at a time when he was finishing well and accepted that in needing light he may have caused slight interference.

Having viewed the recording of the race and considered the evidence, the Stewards were satisfied that Moonlit Wings in causing interference had improved her placing in relation to Mare Quimby and therefore reversed their placings with the result now to read; First - Royal Illusion, Second - Sweet Street, Third - Erins Benefit, Fourth - Mare Quimby and Fifth - Moonlit Wings.

They also reminded J.P. O'Sullivan that enquiries take precedent over any other additional roles that he has on a raceday and he must not in the future cause any unnecessary delay to the holding of an enquiry

D.P. Maxwell, rider of Lough Manor trained by Matthew J. Smith, reported to the Clerk of Scales that his saddle slipped and his mount was pulled up a short while later.