Rothwell and Blackmore double up with Baltinglass Hill 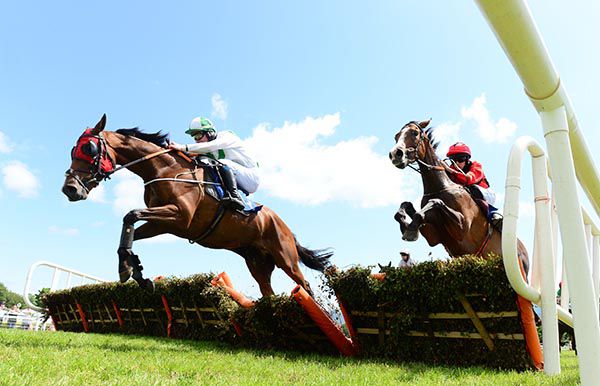 Baltinglass Hill (8/1) brought up Killarney doubles for Philip Rothwell and Rachael Blackmore in division two of the 80-102 handicap hurdle.

Rothwell won both splits of this race as Ricky Langford (18/1) obliged 35 minutes earlier to give him a 170/1 double, while Blackmore was successful on board 7/4f Leac An Scail Lady in the opener.

The leader in this race, Jack Holiday was hard pressed after three out by Rich Belief who was travelling all over him. Rich Belief hit the front after the next, however, Baltinglass Hill was ridden to close on the inner.

Rich Belief stuttered into the last and clipped the top bar as Baltinglass Hill raced past him upon touching down.

Baltinglass Hill availed of the rail as he made the best way home. Rich Belief rallied under Donagh Meyler and gave himself a shot at victory by lunging at the right time but, after a photo finish, Baltinglass Hill held on by a nose.

Rothwell said: “I thought he was an unlucky loser in Navan and then it came up that little bit soft for him in Cork.

“James (O’Sullivan) looked after him when he was beaten in Cork and that’s the difference between him winning and losing today.

“I travelled the horses down here yesterday as I thought it was going to be very warm this morning and it’s no harm.

“Rachael was brilliant at the last and that made a big difference.”