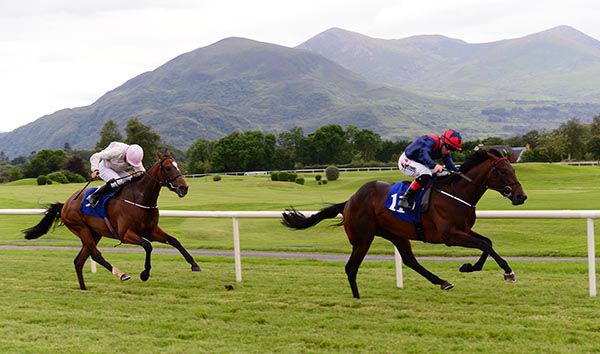 John Murphy was denied a Killarney treble by a nose as the Muckross Maiden went the way of Optimistic Belief (12/1) for Michael O’Callaghan and Leigh Roche.

The winner made all, and though Lusaka came home strongly for Murphy and Robbie Colgan, he just failed to get there, in an event where favourite Lord Of The Manor ran no sort of race back in ninth.

"On his last few runs the ground has been a bit quick for him and it caught him out. Even today it was just good ground and he'll be better when he gets more ease in it,” reported Roche.

"He is genuine, tries hard and is very versatile in that he doesn't have to make the running. There was nothing going on so I didn't want it to turn into a sprint and he is a smart horse. I think he will make a cracking jump horse."

The 75-rated Optimistic Belief was getting off the mark at the fifth time of asking.

The Irish Horseracing Regulatory Board Veterinary Officer examined Lord Of The Manor, trained by A.P.O'Brien, at the request of the Stewards and reported the animal to have pulled a right fore shoe but was otherwise post race normal.

W.J. Lee, rider of Zeydabad trained by Thomas Mullins, reported to the Clerk of Scales that his mount raced very keen early on.

The Stewards interviewed R.C. Colgan, rider of Lusaka, concerning his use of the whip in the latter stages of this race. Evidence was heard from the rider concerned. In his evidence, R.C. Colgan stated that in the concluding stages of this race he had misjudged the number of times that he had used his whip and felt at the time that he had ridden within the guidelines. Having viewed a recording of the race and considered the evidence the Stewards were of the opinion that R.C. Colgan was in breach of R10(3)(g) by using his whip with excessive frequency. Having taken his previous record into consideration, the Stewards suspended R.C. Colgan for three racedays.