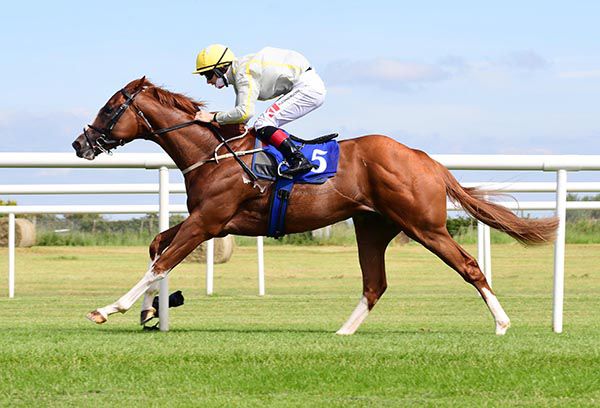 Once Upon A River and Colin Keane
© Photo Healy Racing

A beaten market-leader on debut at Gowran when showing a lot of ability, Once Upon A River came forward nicely to justify odds-on favouritism in the Irish Stallion Farms EBF Maiden at Roscommon.

Sixteen days on from the start of his career, the successful chestnut was soon dictating at the head of affairs under Colin Keane, and it was looking good for Ger Lyons’ runner from some way out.

In the end the 4/5 scorer easily accounted for Canters Well by four lengths prompting Lyons’ brother Shane to say:- “Ger wasn't going to rush him back but he was that well at home and this race presented itself.

“Now that he's got his bracket out of the way, we'll take our time with him. There is no rush whatsoever.

“He'll get further, he loved that ground but he'll get easier ground also and as the season progresses he'll improve with maturity.

“It's all about next year with him as he's a very well-bred horse.

“Unfortunately Trevor lost his dam last week so that was the end of an era.

“Poor Ger had to put down one of his favourite dogs today, Socky, at the same time as he crossed the line so it's been one of those days.

“We're delighted to get his bracket out of the way and next year will be his year.”

Sam Ewing, rider of Nyla Rua trained by T.G.McCourt, reported to the Clerk of Scales that his mount ran very green.