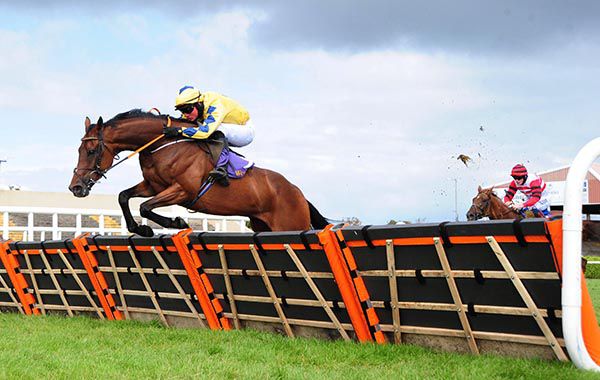 Philip Rothwell sent out two horses for the Curracloe Opportunity Handicap Hurdle at Wexford and he came away with the biggest share of the prize-money as Ricky Langford triumphed under Hugh Morgan.

The Wicklow handler’s Sir Pimpernel (22/1) weakened in the straight after racing prominently and ended up in seventh place.

However the stable first-string Ricky Langford (12/1, off a 182 day break) was strong at the business end.

The home-bred came through from mid-division to track the leaders three out. He led entering the straight and asked for more from two out the successful six-year-old stayed on well on the run-in for a seven and a half length success from Storm Flight (Ricky Doyle).

Rothwell, also on lead-up duties, said: "He is a home-bred horse and he is owned by a bunch of lads (Kings Horses Syndicate) I went to secondary school with.

“They are a bunch of friends from the King's Hospital School in Dublin. I told them that I thought he had a little chance and I'm delighted for them."

Following a request from broadcasters, the Stewards granted permission for a one minute delay to this race.

The Stewards received a report from Ms Noeleen Moloney, IHRB Veterinary Assistant that Bartholemew O'Gorman, a registered stable employee, was found in the IHRB Sampling Unit in possession of potential contaminants (refreshments).

Ms Moloney explained how she had found Mr O'Gorman within the confines of the sampling unit.

Ms Nicola O'Connor, IHRB Veterinary Officer explained that the actions of Mr O'Gorman could have serious consequences by jeopardising any horse sampled on the day and that it was prohibited to enter the sampling unit in possession of any potential contaminants.

Bartholemew O'Gorman accepted the report of Ms Moloney and apologised for his actions.

He admitted that he had previously been warned about using the sampling unit in a similar manner.

Under questioning as to the reason why he was in the area of the sampling unit, he stated that he had a stable employee card for P.J. Rothwell but was not employed by him.

He added that he had assisted P.J. Rothwell with his two runners in this race but he had no involvement with the winner which was also trained by P.J. Rothwell.

He further added that he had gone to the sampling unit to congratulate P.J. Rothwell.

Chris Gordon, IHRB Head of Security informed the Stewards that Bartholemew O'Gorman had authorisation to be in the stable yard today.

Having considered all the evidence, the Stewards were of the opinion that Bartholemew O'Gorman was in breach of Rule 272 (i) in that he had acted in a manner which was prejudicial to the integrity, proper conduct and good reputation of horse racing.

Having taken his recent previous record in relation to Rule 272 into consideration, the Stewards requested Bartholemew O'Gorman to leave the premises immediately and informed him that this matter was being referred to the CEO of the IHRB for further investigation.