Penny Jar earns break after three victories in a row 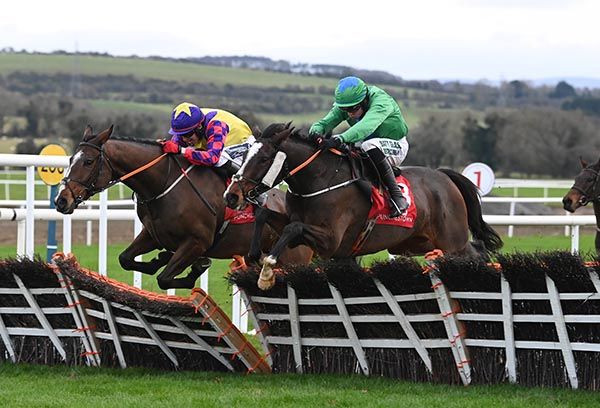 Penny Jar, near side, beats Clear The Clouds by three parts of a length
© Photo Healy Racing

Penny Jar is a very in-form horse and an 8lb rise in the weights didn't prevent him from bringing up his hat-trick in the concluding handicap hurdle at Punchestown.

The 15/2 shot was produced by Conor McNamara to dispute the lead with Clear The Clouds on the approach to the final flight and came home best on the run-in to prevail by three parts of a length.

The runner-up was the 4/1 favourite and he was a length and a quarter in front of Verdant Place who flashed home for third at 14/1. Iridescent completed the placings in fourth at 14/1 in this massive field of 22 runners.

“What a little horse! He's the smallest horse in the race by a mile,” said trainer Pat Downey.

“He was great in Listowel, I was really impressed with him there after he made a bad mistake.

“Today I was afraid of the ground to be honest but Conor went around the outside and they were going no gallop. He probably got the best of the ground and he just stayed, he loves a fight.

“That could be it now, I know he's only run three times but he's won three times, so he's entitled to a little break now.

“He'll come back in the spring. He'll go up another few pounds now, I suppose, but that was good. I thought the other horse had him down the straight but he just kept battling.

“He's so small that he'll never jump a fence, he is what he is. I'm absolutely delighted.”

The Raceday Stewards interviewed M.P. Fogarty, rider of Iridescent, concerning his use of the whip in the closing stages of this race. Evidence was heard from the rider concerned who accepted he was in breach of the whip Regulation. Having viewed a recording of the race and considered the evidence the Raceday Stewards were satisfied that M.P. Fogarty was in breach of R10.3(g) by using his whip with excessive frequency and having considered his record they suspended him for five racedays.