O'Hanlon's switch to Killarney pays off 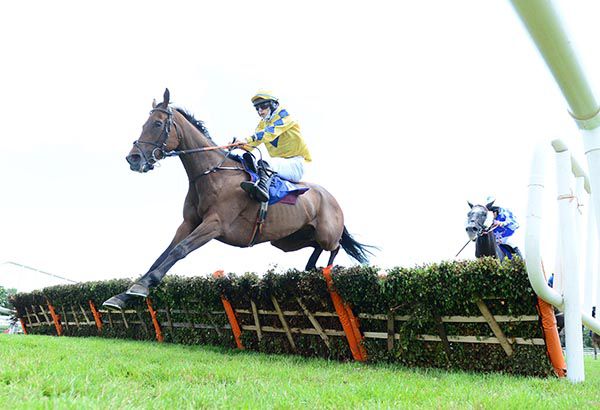 Ricky Langford up and over the final flight
© Photo Healy Racing

Ricky Langford justified Philip Rothwell's confidence with victory in the first split of the two mile one handicap hurdle in Killarney.

The 18/1 shot made headway before four out and travelled into contention before the next. He was on terms with All The Angels jumping three out and just behind that rival negotiating the penultimate flight.

Paddy O'Hanlon went for the whip and his mount took over approaching the last. They jumped it well and kept on strongly to draw three and a half lengths clear at the winning post. Trenchtown Rock kept on for second at 33/1 and was half a length ahead of All The Angels (12/1).

Rothwell said: “I thought he’d win on that good ground. He was doing a half-speed when brought down the last day.

“James (O’Sullivan) chose to ride another horse (Presenting Lad). Paddy was down to ride one in Kilbeggan and I told him to get off it and come here.

“He’s owned by some friends of mine from school (Kings Horses Syndicate). He won for them last year and it’s great that he’s won again here.

“He’s handicapped over fences similar to his hurdle mark, so we might have a go at a handicap chase before the summer is out.”

This was Ricky Langford's second success over hurdles with the other coming at Wexford in September last year.