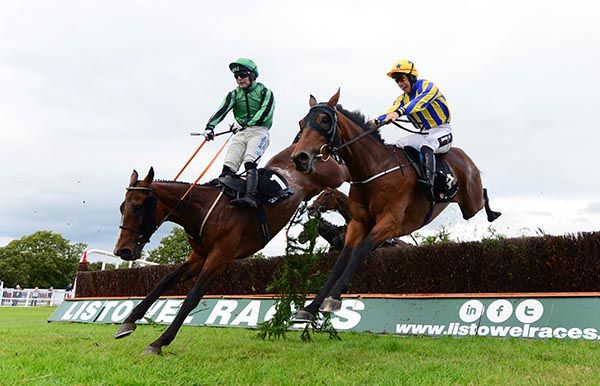 A sole runner from across the Irish Sea, the young chaser was a winner over three miles when most recently seen taking the Kerry National at Listowel.

Despite his age, he is an experienced chaser having made 12 starts over fences, only once finishing unplaced when mixing competitive handicaps with Graded contests.

“All has gone well since Listowel, this race has been the target and we’ve been pleased with his prep,” O’Brien said.

“He’s obviously been running in fiercely competitive handicaps and we’re hoping that the ground will be as nice as possible. We’re really looking forward to it.

“He’s a youngish horse, but he has plenty of experience for his age and we’re hoping that will stand to him.

“Someone said that no five-year-old has won the race before, but he is a pretty experienced one.”

Dan Skelton has a notable chance in Le Milos, a consistent seven-year-old who will be partnered by the trainer’s brother Harry.

The bay was previously based with Tim Vaughan and it was at Bangor earlier in the month that he ran for the first time for new connections.

Contesting a three-mile handicap chase, the gelding was an impressive four-and-three-quarter-length winner, jumping well throughout and putting himself on track for Saturday’s contest.

He will carry a 4lb penalty a a result of that success, but Skelton considers it a fair trade-off for what he learnt about Le Milos after the performance.

“He’s been really well since Bangor, I’ve been delighted with him,” the trainer said.

“We went to Bangor wanting to learn something and I think we did learn something. He’s been in great form since, it’s a highly competitive race but I am happy with him.

“We learnt more than the 4lb we got! It’s a big step up, make no mistake, but he’s ready for it.”

Le Milos has form on all manner of ground conditions and though his one run for Skelton came on heavy, the trainer is not overly concerned by Newbury going currently described as good.

“It was really soft when he won for us, but at the end of the day he’s out of a King’s Theatre mare,” he said.

“I’ve never danced that dance with him so I can’t be sure, but I’m not feeling negative.”

Lucinda Russell is preparing to run last season’s Ultima winner Corach Rambler in the race off a weight of 11st 1lb.

The eight-year-old made his seasonal debut in the Colin Parker Chase at Carlisle, a race in which he finished fifth over an insufficient trip of two and a half miles.

Stepping back up to his preferred three miles at Newbury, the gelding will require the ground to be suitably soft if he is to run.

“I have walked the course and I think it is just on the right side of OK,” said Peter Scudamore, Russell’s assistant and partner.

“We will see how it dries out. It is OK, it is good ground. I rode around it this morning (Friday) and rode Corach, I gave him a canter this morning.

“I’m pretty sure he’ll run. I’m walking it by myself and we will see what Lucinda says. They are going to put more water on (on Friday night) and it is just OK.

“We will see what happens. At the moment, I think he’ll run.”

Joe Tizzard is well represented in the race as he will saddle a trio of runners, with Oscar Elite the most fancied at present and Harry Cobden booked to ride.

The gelding finished third behind Corach Rambler in the Ultima last term and then made his seasonal bow over hurdles, finishing fifth in the Grade Two bet365 hurdle at Wetherby in October.

“I thought Oscar Elite’s first run was better than the bare result to be honest. It was the perfect prep, I hope, and this has been the target for him,” Tizzard said.

“He was third in the Ultima, he’s had a little wind operation and Harry (Cobden) knows him, so I think he should be very competitive.”

Fiddlerontheroof was beaten just half a length in the race last year and bids to go one better this time when carrying 5lb more than in 2021.

“I’m really pleased with Fiddlerontheroof as well. He’s 5lb higher and he didn’t win it last year, but he’s in good nick and had a lovely prep run,” Tizzard said.

“I think there’s a big race in him. He’s knocked on the door and in a minute he’ll get his day, which I think he deserves, but whether there’s something lower in the handicap that beats him, I’m not sure.

“We’re putting the cheek pieces on him, just to help him travel and help Brendan (Powell, jockey).”

Tizzard’s third runner is Lostintranslation, who will be benefited by the claim of the trainer’s nephew, young rider Freddie Gingell.

“Fred takes the 7lb off Lostintranslation and he knows him well,” said Tizzard.

“I would have loved to run him in a veterans’ race in the last couple of weeks but the ground went against him — he loves good ground.

“I’m certainly not dismissing him. He deserves to be there, class can shine through in handicaps and he’s a good horse on his day.

“He’s in great nick at home, but those younger horses might just have the edge on him.”

Sam Thomas will take his chance in the race with Our Power, winner of the London Gold Cup Handicap at Ascot when last seen and the recipient of a 5lb rise in rating as a result.

“He’s very economical and is not a horse that is going to be coming up outside the wings at his fences. He’s very much A to B and that’s what you want in a long-distance handicap,” he said.

“My only concern is the first back straight and last back straight. We just want to make sure he doesn’t have any bad jumpers in front of him and from there gets into a rhythm.

“He’s progressed from last season, winning first time out, and certainly with these horses over fences, they don’t tend to come to themselves until their later years. Fingers crossed we’re only at the start of what’s to come.

“We’re going there optimistic as much as anything and if you told me last season we’d be going in with an each-way chance in the Coral Gold Cup, I’d be very happy.”

Paul Nicholls runs Threeunderthrufive, third in the bet365 hurdle when beginning his season at Wetherby before heading to Newbury for a racecourse gallop.

“He is fine and in good shape. He had a good prep and ran nicely in a hurdle race,” the trainer said.

“I thought he had a nice workout at Newbury, any rain won’t do him any harm.

“Whether 151 is a realistic mark of his capability, I don’t know, but we’ll see on Saturday”

Shouldering top weight is Venetia Williams’ Fanion D’Estruval, who has been allocated 12st but will see his burden eased slightly by amateur rider Lucy Turner, who claims 5lb.

It is a first run over the trip for the seven-year-old, who was last seen taking fourth place in the Ryanair Chase at Cheltenham in March.

“It’s going to be a tough ask for him first time out and he’s got a big step up in trip as well,” Williams said.

“But for a decent prize like that, we are looking forward to him giving it his best shot and he has run well at Newbury on a few occasions in the past.”