Marvel De Cerisy off the mark over fences 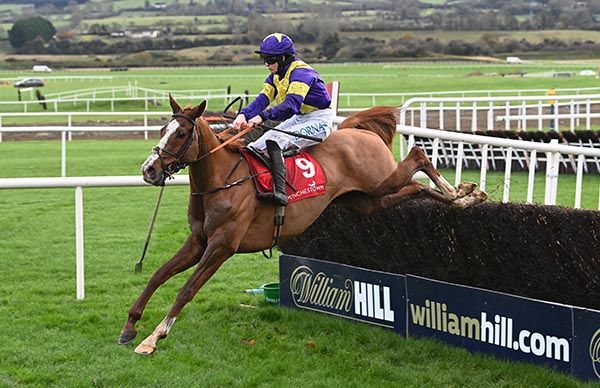 Marvel De Cerisy bounced back from a fall on chasing debut at Wexford to land the rated novice chase at Punchestown in good style for Rachael Blackmore.

Front-running Gracchus De Balme crashed out at the fifth last where the tracking Grandero Bello was badly hampered and unseated his rider. This left Aarons Day in the lead.

The eight-year-old gelding was collared at the penultimate obstacle, however, by Marvel De Cerisy who asserted before the last.

Once it was negotiated, the 4/1 joint favourite ran on well along the run-in to win by six and a half lengths. Aarons Day was outgunned in second at 14/1, but was four and a half lengths clear of Gallyhill (10/1). Get My Drift the other 4/1jf, disappointed in a well-beaten sixth.

Trainer Henry de Bromhead said: "We're delighted with that. We wanted to see would a step up in trip (extended 2m3f) suit him which it obviously did.

“He was good, obviously the race fell apart a bit but we were still happy to see him come out and win. I'm delighted for Caolan (Woods, owner).

“He seemed to jump well, Rachael really nursed him around and she was in no panic anywhere with him. She really helped him round.

“It's nice to see him come back to form. We'll look at our options now and see what's coming up.”

De Bromhead also gave an update on his unbeaten superstar Honeysuckle who bids for a fourth Hatton's Grace at Fairyhouse on Sunday: “She's great, not a bother on her. She's really good and seems in good form. Everyone seems happy with her.”