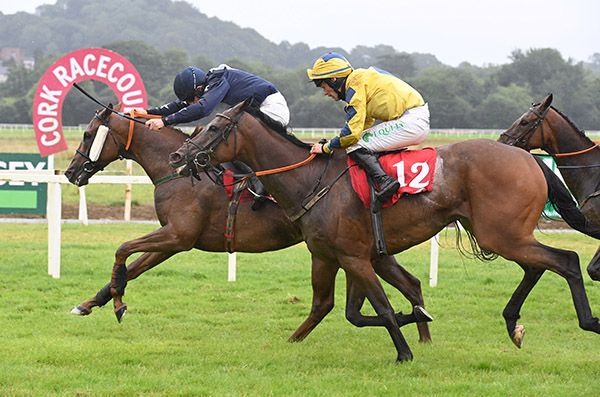 Jon Ess in front at the line
© Photo Healy Racing

Jon Ess outbattled Ricky Langford close home in the Fermoy Handicap Hurdle at Cork but that only told half the story. Raven Rule and Shane Fitzgerald had moved to the front approaching the second last and asserted before the final flight.

She plunged at it, though, and gave Fitzgerald no chance of keeping the partnership intact.

Ricky Langford was left in a narrow lead on the run-in but Jon Ess tackled him and got his head in front approaching the winning post.

The winner halved in price from 28/1 to 14/1 and scored by half a length for Conor O'Dwyer. Runner-up Ricky Langford went off at the same price. Trixie Mc was another half a length away in third at 7/1.

Winning jockey Ricky Doyle said: “Jumping is the name of the game and it was great to see this horse bounce back. He had a great run in Fairyhouse and then Conor’s horses lost their way for a while.

“He had cheekpieces on for the first time and they helped over two miles today. There is nothing ungenuine about him but he may need to step up a bit in trip.

“He’s a right fun horse and great for the lads that own him. He likes Dundalk and can go to the Festivals over hurdles.”