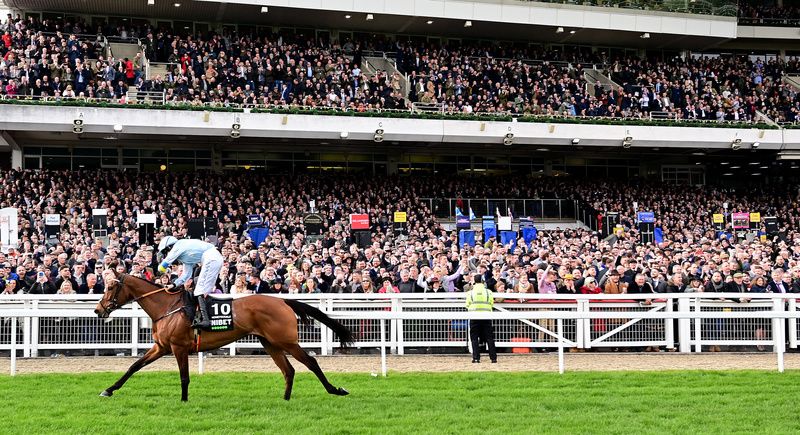 Honeysuckle is primed to extend her undefeated record as she bids for a second Paddy Power Champion Hurdle title at Punchestown on Friday.

The Henry de Bromhead-trained mare silenced any doubters at the Cheltenham Festival when retaining her Champion Hurdle title and preserving her flawless record to a ratio that now balances at 15 runs and 15 victories.

A two-and-a-quarter-length winner of this race last season, with connections of Constitution Hill opting to keep their powder dry the eight-year-old will face just five rivals this time around as she looks to add a 16th triumph to her CV.

De Bromhead said: “Honeysuckle is in mighty form since Cheltenham. She seems really well. She had to battle to win at Punchestown race last year but they went some pace in it and I think she did what she had to do and was good on the day.

“I think it’s fair comment to say she only does what she needs to in order to win her races and that probably has helped her keep reproducing so consistently throughout her career.

“It’s a privilege for all of us to be associated with her. She has been incredible since being bought by Peter Molony and Kenny Alexander at Punchestown and we can’t wait to go again.”

British interests are represented by the David Pipe-trained Adagio after his eighth-placed Champion Hurdle performance.

Prior to that the five-year-old has either won or finished second in a string of big races after a juvenile season that culminated in a top-flight victory in the Finale Juvenile Hurdle.

“I think he’ll like conditions, he’s travelled over well, there’s only six runners and quite a lot of prize money on offer so we’ll try and pick up as much as we can,” said Pipe.

“We were going to go to Aintree but he wasn’t quite right so we had to miss that, he hopefully comes here a fresh horse, we’ll put a pair of sheepskin cheekpieces on him as well.

“I think he’ll like the track, he’s travelled over well and seems in good form.

“There is still the one runner that is probably unbeatable (Honeysuckle), but we’ll be giving the other four our best shot.”

The JP McManus green and gold silks will be worn by two contenders, with Willie Mullins’ Saint Roi and Joseph O’Brien’s Darasso both in action.

The former finished fourth behind Honeysuckle at Cheltenham and in the Irish Champion Hurdle, whereas Darasso was a winner last time out at a lower grade when taking the Rathbarry & Glenview Studs Hurdle at Fairyhouse.

“He won well at Fairyhouse and is probably up against it against the mare (Honeysuckle) but he goes there in good form, in winning form, and he won’t mind the ground so we’re hoping for a good run.

“He’s very consistent and is a great horse to have. He’ll rarely let you down.

“Saint Roi ran very well in the Champion Hurdle. He was no match for the mare but if he turns up in the same form and we get place money, we’ll be happy.”

Gordon Elliott’s Teahupoo, a six-time winner who disappointed when finishing last in the Champion Hurdle at Cheltenham, and Mullins’ Echoes In Rain, last seen coming home fifth in the Close Brothers Mares’ Hurdle at the same meeting, also take their chance.

On the same card is the Alanna Homes Champion Novice Hurdle, another six-runner affair and a race with three entrants from the Mullins yard.

The Cheveley Park-owned Deploy The Getaway and former Grade One bumper winner Kilcruit are both engaged, as is County Hurdle hero State Man.

Patrick Mullins, son of trainer Willie, said of the latter: “I’d be very disappointed if he’s not a Grade One winner in the future.

“He showed plenty of speed to win the County Hurdle and it’s just about splitting up the novice hurdlers. There is a fantastic crop there going forward for next year.”

Noel Meade and Elliott have a runner apiece in Highland Charge and Three Stripe Life respectively, with the field then completed by Pat Doyle’s Flame Bearer.

The seven-year-old was won his past three starts, taking a Fairyhouse maiden before landing the BetVictor Novice Hurdle at Naas and then the Tom Quinlan Electrical Novice Hurdle — both Grade Two events.

“He has progressed nicely right through the season, from his hurdling debut in Cork last December, when he pulled too hard and blew up because we’d no gallop done with him due to the ground being so quick,” said Doyle.

“He has learned to settle far better now and was a bit unlucky in Naas before winning at Fairyhouse and then the two Grade Twos at Naas and Fairyhouse again.

“He showed a good attitude the last day after getting stuck in a pocket to get up and I couldn’t be happier with him. He’s in great order.

“The point-to-points are our bread and butter but it’s powerful to have a horse with good chance in a Grade One at the Punchestown Festival, especially with (son) Jack riding and we’re looking forward to it.”