Clarens seals his hat-trick for Flavin 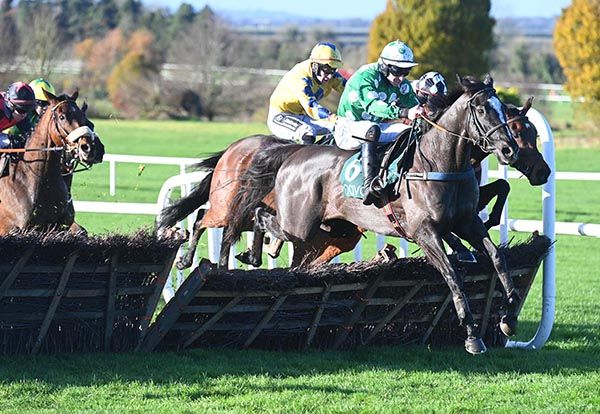 Clarens touches down on the run-in
© Photo Healy Racing

Progressive Clarens (4/1) brought up his hat-trick in the opening two-mile hurdle at Navan.

Eyes were drawn to him making sustained progress on the outer two out. He was soon pushed along by Jack Foley to close on the leaders and picked them off at the last.

The four-year-old gelding didn't put in his best jump there, however, he landed on an even keel and was ridden by Foley to go and win his race.

Market-drifter Sil Ver Klass (20/1) ran on strongly to keep the leader honest but was a never nearer three parts of a length away at the line. Ricky Langford (10/1) and The Dasher Conway (17/2) picked up place money in third and fourth respectively.

Trainer John Flavin said: “He would have learned more today than ever before because he was shuffled back further than we wanted, and to be fair to Jack, he sat with him and had to come wide. Thankfully he jumped the last well and stayed going.

“It was lovely. He's improving all the time. Today was the plan, there is a novice handicap in Leopardstown on St Stephen's Day and we might go there but he's been on the go now plenty long enough.

“We'll see how he is in the next couple of days before making any definite plans as he might need a break. He's a tough little lad but he's only four so I don't want to empty him either.

“We'll give him a few days on the beach and he'll tell me.”

Declan McKenna of Miracle Racing Syndicate added: “We started this syndicate two years ago, probably at the worst possible time and I have to thank all the lads for supporting us.

“We have a couple of horses and there are 16 involved in this horse, lads local to us and also from Antrim, Kilkenny and England.”

Clarens began his winning run in an opportunity handicap hurdle at Listowel in September before obliging in the same grade of race at Wexford.