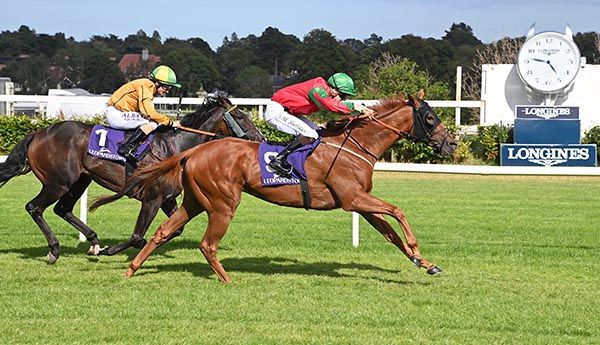 Denis Hogan's Cedar Rapids got off the mark on his 15th start in the extended seven furlong claimer at Leopardstown.

The leader increased his advantage before halfway but Mischief Star cut into the lead and swept past him approaching the straight.

He soon went on, however, Cedar Rapids began to make headway in the final quarter of a mile and was ridden by Joey Sheridan to challenge at the furlong pole.

Cedar Rapids came home the stronger and hit the front in the final 100 yards. He went on by three parts of a length from 2/1 favourite Mischief Star. Plankton ran on for third at 7/2, beaten a length and a half by the winner.

Sheridan said: "He's been consistent. He took me there well and it was a case of picking off the horse in front, he had a good look when he got there.

“He'll be a fun horse for someone if he is claimed. I'd say he'll jump a hurdle as well with the size of him.”

Claims after the race: