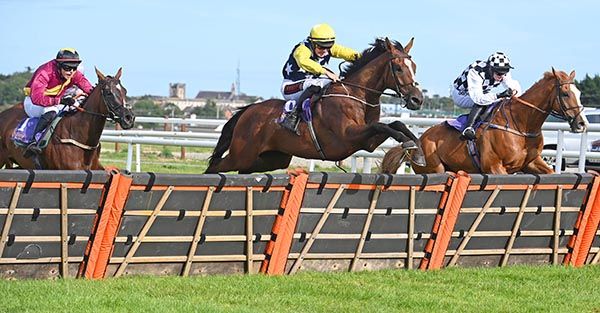 Kieren Buckley got his second Irish winner on the board when Battle Of Benburb (6/1) landed the Think Print & Design Handicap Hurdle.

The 5lb claimer, who enjoyed plenty of success in his native England before coming over here to take up a position with Gavin Cromwell at the beginning of the jumps season, bided his time in mid-division on the Flat-bred who was going three miles for the first time.

Battle Of Benburb threw down his challenge on the approach to the last and, having gained a narrow lead at that final flight, was driven out to score by two lengths from the staying-on 4/1 favourite Good Man Turk Long-time leader Naturally Blonde was a further neck away in third.

Winning trainer John McConnell said: "That win was coming. He is a fun horse, Kieran said he will jump a fence too. He is only a young horse. Gavin (Cromwell) had him previously and won with him in Tramore. We claimed him out of a race at Clonmel. He has won and been placed for us now and is another advertisement for those claiming races as he wasn't a dear horse.

"He could win over fences and on the Flat. He is just a galloper. Seamus (Devlin) is from Tyrone and it's his first winner so I'm delighted for him."