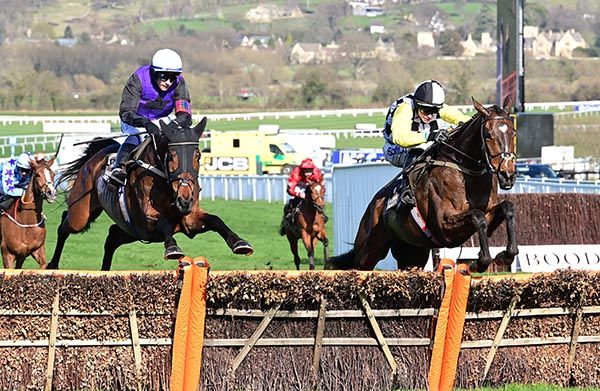 The Nice Guy provided Sean O'Keeffe with his first victory at Grade 1 level and continued another memorable day for Willie Mullins at the Cheltenham Festival when leading home a 1-2 for the champion trainer in the Albert Bartlett Novices’ Hurdle.

With 2/1 favourite Hillcrest never travelling and pulled up after the fourth-last in the Grade 1 three-mile event, the race seemed at the mercy of second-favourite Ginto with Jack Kennedy’s mount tanking approaching the final bend.

Yet as he attempted to ease between rivals, he appeared to take a false step and suffered what sadly proved to be a fatal injury.

That left the free-going Minella Cocooner to fight it out with stablemate The Nice Guy (18/1), who had been produced with a timely run approaching the second-last.

Carrying the colours made famous by Monsignor, the Malcolm Denmark-owned seven-year-old outstayed his rival up the hill to score by five lengths under O'Keeffe who enjoying his first Festival success on Galopin Des Champ in the Martin Pipe last year. Minella Cocooner had four and a quarter lengths to spare over Bardenstown Lad

Mullins, who won the opening two races with favourites Vauban (6/4) and State Man (11/4), said: “Minella Cocooner must have a huge engine to make those mistakes and still be there at the finish.

“What a ride from Sean, he rode Galopin Des Champs last year here for me, he’s an up-and-coming rider, he’s very cool.

“I think he’s someone who is going to come through the ranks, it’s always nice to have those, but Paul will be around for a while yet.

“Things can’t have gone to plan for the winner as the plan was to be in the first six or eight, but he obviously wasn’t quick enough to do that and he just dropped him in and crept his way around. That’s the good thing about fellows like that, they have the ability to change tactics. I like that sort of confidence.

“The horse shows nothing at home. I almost told Malcolm to sell him, but he said to give him a run and he won. He was going to go chasing but it was too late in the season so we ran him again and he won his second bumper, we then gave him a run in his hurdle and here we are today, he keeps improving all the time.”

Of Hillcrest, trainer Henry Daly said: “Racing doesn’t change in being full of ups and downs and we have hit one of the downs.

“We’ve come to Cheltenham as favourite for the Albert Bartlett and run no sort of race at all.

“At this stage there are no excuses, he just ran no sort of race.”

“The ground was very tacky, he was never travelling or going through it. He wouldn’t let himself down. It wasn’t happening for him, but there will be another day.

“I pulled him up and he’s all OK. I feel sorry for connections of Gordon Elliott’s horse (Ginto).”