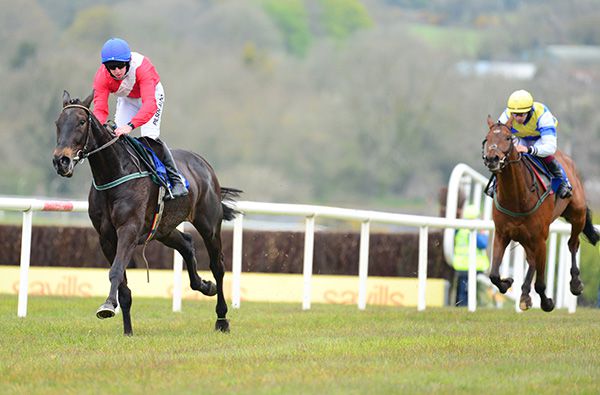 The Adare Manor Opportunity Maiden Hurdle at Tramore saw Willie Mullins complete a double as En Beton stylishly lived up to his even money favourite billing.

Brian Hayes steered home the opening Closutton victor, Gelee Blanche, whilst it was Conor McNamara that was entrusted with the spin on En Beton for Cheveley Park Stud.

A beaten market-leader when last seen out, on heavy ground at Limerick in December, the successful Network gelding seemed to come on for his transition on to a sounder surface as he easily accounted for market-rival Rocky’s Howya by six lengths.

"That was a nice start for him. He has just had little niggles all season and we never got him going. I want to go novice chasing with him next season so we decided to break his duck over hurdles even at this late stage. A maiden hurdle win is not the be all and end all of his career,” said Mullins.

"He looks a big chasing type and that's what we will do with him. I'll have a word with connections and if we get a nice month of May we could go straight chasing with him. He would handle it bottomless but it's just with little problems all season we missed that ground. He handled it well today and we wouldn't be looking for it too much better than that. He is more a winter horse.

"Conor said he said he slipped in the dip the first time around and he just came a bit wider the next time with him."