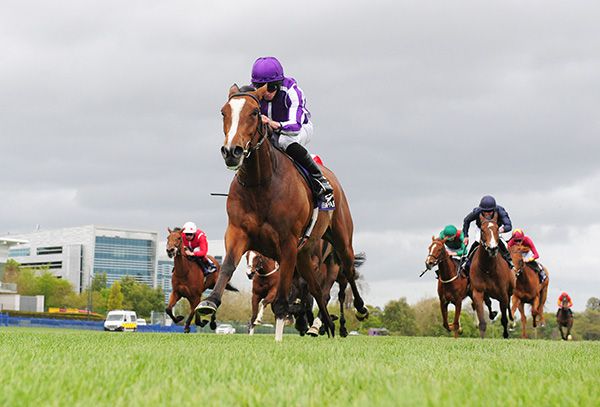 Joan Of Arc dominated the Group 3 Irish 1,000 Guineas Trial in Leopardstown from the front and burned off her rivals.

She soon led over the mile trip and was pressed by Flirting Bridge with two and a half furlongs to travel.

However, the 11/4 favourite cranked up the pace in the final quarter of a mile and began to increase her advantage.

She kept on well to pass the post a length and three quarters to the good from Flirting Bridge (50/1). Thinking Of You was the same distance back in third at 40/1.

Aidan O’Brien said: “The last day was a bit of a non-event for her but she came out of it lovely. The plan was to come back here and then maybe go to the Irish Guineas.

“Ryan said she might stay a bit further so we’re very happy with that. She’s a very relaxed filly.”

On his Derby contender, High Definition, he said: “High Definition will do a bit in the morning and we are hoping that he might go to York. His blood count is still coming down — it’s not one hundred per cent yet but it’s a lot better than it was. It’s nearly there.

“We need to run obviously. He has to get out if he’s going to the Derby.

“He’s not been medicated because we couldn’t find anything.”

Ryan Moore said of Joan Of Arc: "She's a high-class filly, beautiful mover. I think when the ground gets quicker it might help her again. She's going the right way.

"She deserves to take her chance at a higher level. She's beautifully bred and we would be very happy with what she did today. She did everything right.

"I think there is a chance she will stay a little bit further."