Jack is back after Holiday 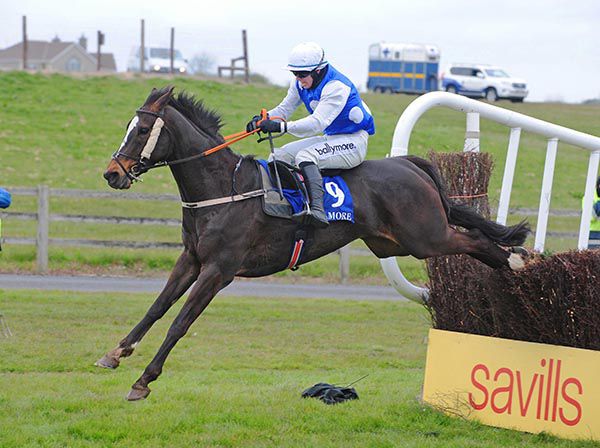 Jack Holiday returned from a break to win the Lismore Handicap Chase, making all under Darragh O'Keeffe.

Trained in Co Limerick by John Gleeson, the son of Jeremy was last seen winning at Tipperary in October and was sent to post an 8/1 chance this afternoon.

Sent straight to the front, the Flor McCarthy owned seven-year-old was briefly pressed on the run to two out, but went on again before the final fence, coming home four and three parts of a length to the good.

Carnet De Stage (18/1) finished second under Maxine O'Sulllivan for her father Eugene, while Bolbec (11/2 from 25s early) was another length and a quarter away in third.

Western Boy was sent off the well-backed 15/8 favourite (from 11/4), but he could only manage a disappointing eleventh under late replacement rider Sean Flanagan.

Glesson said afterwards: "He is brilliant to jump and has always been a good leaper. He has grown up a lot and is a lot more settled. I was worried before I saw him walking the parade ring because he was as quiet as a lamb.

"He doesn't have to go out in front like he did today, but it is easier that way. He is settling down to the game now.

"He was just a bit wild before and I spent a lot of time trying to get him to settle. He used to have earplugs and I tried a hood, but he is just more settled now. He has matured and you can't beat time.

"He will go for something similar now whenever he can get in! He is owned by Flor McCarthy and he is great owner."