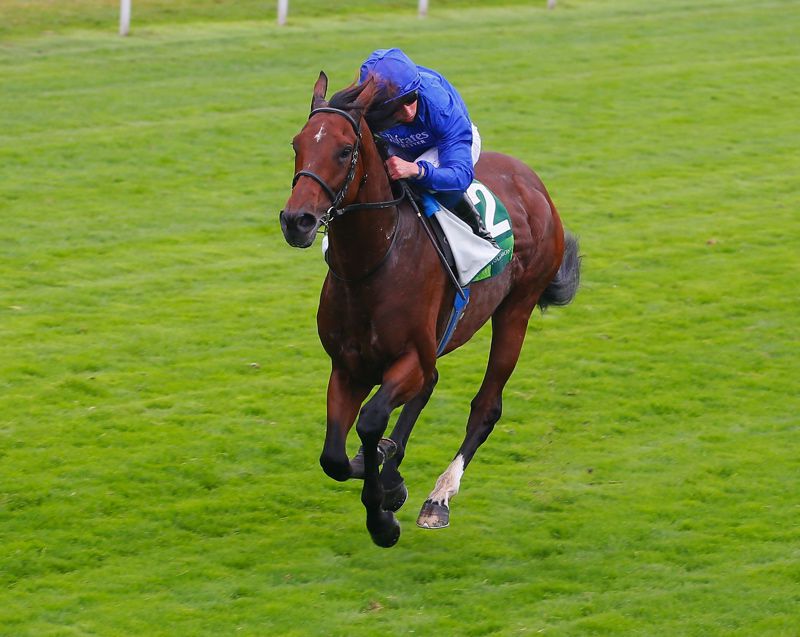 His year began in Dubai where he took a Group Three by a wide margin before he won the Coronation Cup, which was run at Newmarket last season.

After that he took on the mighty Enable, as she reappeared in the Coral-Eclipse but could not catch Ghaiyyath — who was relentless from the front under William Buick.

Buick repeated the same tactics in a top-class Juddmonte International at York — in which he beat Magical, 2000 Guineas hero Kameko and Prince of Wales’s winner Lord North. The race on the Knavesmire was recognised in the awards as the best in the world in 2020.

Magical turned the tables on Ghaiyyath in his final outing in the Irish Champion Stakes, but he had already done enough to secure the prize, with a final rating of 130.

“It’s a much-deserved award, given what he did this summer — he wore his heart on his sleeve, and for me and the team he brightened this summer up in what we know was a testing season.

“All credit goes to the team and Godolphin and, most importantly, Sheikh Mohammed for allowing us to train a horse like this and allowing us to give him the time that was needed to come to the fore.

“I’ve been fortunate over the last couple of years to have him over 10 and 12 furlongs and then Blue Point over five furlongs, and both were at their best at the age of five — which is all thanks to Godolphin allowing us to keep them in training, so they can show what they can do as the finished article.

“Darley Stud were very keen to get their hands on him once they knew he was coming to the end of his career, and I’m sure he’ll be a prized asset. He’s a third-generation sire after Dubai Millennium and Dubawi — they all competed at the highest level. He’s got a fantastic pedigree and is striking-looking.”

Bob Baffert’s Authentic (126) was crowned leading three-year-old and the top dirt performer on the back of wins in the Kentucky Derby and the Breeders’ Cup Classic.

“Authentic was just getting better and better, and to put him up there with some of those great horses is amazing,” said Baffert.

“It takes a really good horse to win the Derby and the Breeders’ Cup, like (American) Pharoah did. It’s just an honour. To have a horse that good is what it’s all about.”

Frankie Dettori claimed the World’s Best Jockey title for a third successive year, a title based upon performances in the 100 highest-rated Group and Grade One races all over the world.

Dettori, who turned 50 in December, said: “It’s a great honour to win it for the third year in a row — who’d have thought at my age I could still do it!

“It’s a great initiative from Longines to have it for the 100 best races around the world.”

“For us Royal Ascot is the pinnacle, and Stradivarius has been around for years. He’s an amazing little horse with a fabulous turn of foot,” he said of the multiple Gold Cup winner.

“Palace Pier is a wonderful miler who came on the scene at Royal Ascot, winning an epic St James’s Palace. He then took on his elders in the Jacques le Marois, which is one of the best mile races in Europe.

“It goes without saying Enable has not just been the best horse but the horse I’ve loved most in my life — she’s won races around the world.

“I miss her a lot, but she gave the public so much joy, and she helped me win this award.”