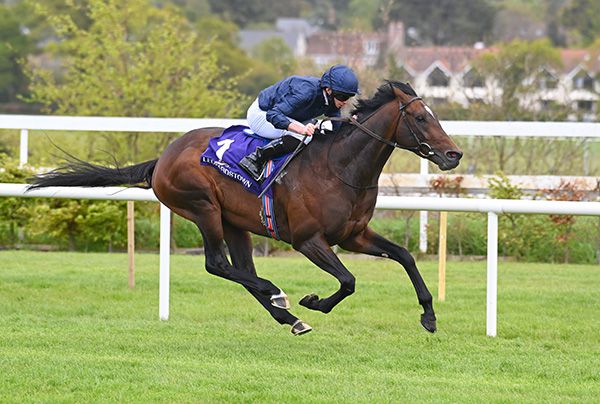 Bolshoi Ballet brought up a Group 3 double for Aidan O'Brien and Ryan Moore at Leopardstown in impressive fashion.

The even-money favourite contested the Derrinstown Stud Derby Trial over a mile and two and tracked 200/1 outsider Wexford Soil before hitting the front three furlongs out.

He readily asserted by the two pole and drew clear of his toiling rivals with a furlong to go.

The Galileo colt hit the line six lengths ahead of stablemate Lough Derg (9/1). Fernando Vichi was half a length further back in third at 25/1.

Jockey Ryan Moore said: "He's a very professional horse and he was always travelling beautifully through the race. He was very smooth.

"He ticks a lot of boxed and every run in his career he has improved from. He's in a good place. It was a proper test today and that will stand him in good stead.

"It's very windy and inexperienced horses are getting knocked around. He has a super attitude and is a straightforward horse."

Aidan O’Brien added: “He’s very uncomplicated, quickens, relaxes. We always loved him. He travelled to France last year in ground that we knew he wouldn’t like but we wanted to travel him for experience.

“We are delighted with that and we couldn’t have asked for any more from him.

“There was an even pace which was great. He quickened well and he gets it (the trip).”

This was the 14th time that Aidan O'Brien had won this Derrinstown Stud Derby Trial.

O'Brien and Moore also landed the Irish 1,000 Guineas Trial (Group 3) on the card with Joan Of Arc.

Paddy Power made Bolshoi Ballet 2/1 favourite from 5/1 co favourite for the Cazoo Derby and support saw his price contract to 15/8 favourite.

The Stewards enquired into possible interference in the closing stages involving Fernando Vichi, ridden by G.M. Ryan, placed third and Southern Lights, ridden by D.P. McDonogh, placed sixth, where it appeared that interference may have occurred. Evidence was heard from the riders concerned. D. P. McDonogh stated that he was finishing fast and had to check when the gap in front of him closed. G. M. Ryan stated that he was not aware that there was a horse on the rail when he moved to the rail. Having viewed the recording of the race and considered the evidence, the Stewards were of the opinion that while Fernando Vichi had caused interference to Southern Lights, he did not improve his finishing position as a result of this interference so they made no alteration to the Judge's placings. They were, however, of the opinion that G. M. Ryan was in breach of Rue 214, in that he had ridden carelessly. Having considered G. M. Ryan's record in this regard the Stewards suspended G. M. Ryan for three racedays.

Belle Image re-routed to the Curragh after setback

Belle Image will miss Royal Ascot following a slight setback and instead Sheila Lavery is eyeing a Group 2 target at the Curragh next month.

With the going at Royal Ascot now Good To Firm and expected to ride even quicker than on Tuesday Lord North is a significant non-runner from the Prince Of Wales's Stakes at 16;20.

The going description has eased slightly following 3mm of rain overnight at Wexford and is now good, good to yielding in places.