A sad day for the sport 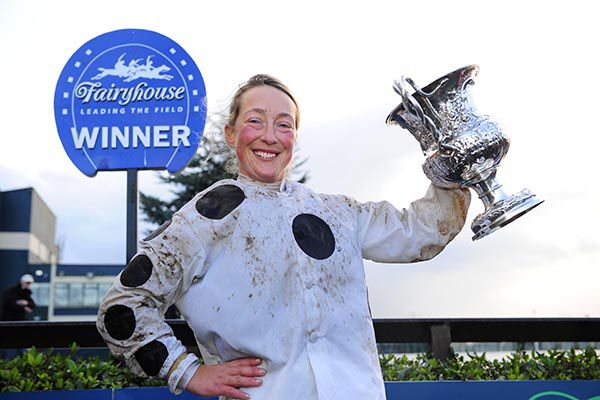 The death of amateur jockey Lorna Brooke is devastating news for everyone associated with racing. The 37-year-old who was critically injured in a fall at Taunton racecourse 10 days ago tragically passed away yesterday.

Everyone with an interest in horses, including those who simply bet on them, knows how dangerous this sport is for the participants but all too often we put that to the back of our minds. Unfortunately, it takes a tragedy like Lorna’s to bring those dangers back into sharp focus.

At times like this we remember all those other brave souls whose lives were cruelly cut short in their prime. Everyone involved within horse racing will have known someone personally that suffered this fate but for most of the public who causally follow the sport many of these riders are simply names on a racecard.

I fall into the latter category when it comes to Lorna whom I didn’t know. Lorna had held an Amateur licence since she was a teenager so was obviously very passionate about the sport. In order to try and get a sense of who Lorna was I looked for some content about her and found a news report we published on this site after she won the inaugural Lady Riders Handicap Chase at Fairyhouse in 2015, her sole victory in Ireland.

The piece included some quotes from Lorna when she was interviewed after the race: "I'm surprised and shocked but very happy.

"I only found out yesterday that I was riding in the race and then we had a power cut last night and I arrived at the airport with no ticket. My flight was also delayed, so I thought that everything was going bad.

"The race went to plan and he got into such a rhythm jumping. He's not very big, and the wind hit us and we gave the rail a fair bump.

"I could see Katie (Walsh) but my horse still had plenty in the tank. I'm glad to be a part of the race, and to win it is even better."

May she rest in peace.

Rachael Blackmore, as a seven pounds claimer, finished a well-beaten fourth in that Lady Riders’ Chase six years ago. The Grand National winning rider is now within touching distance of her first Jockeys Championship.

With eight National Hunt fixtures remaining in the season she trails reigning Champion Paul Townend by eight wins. Townend is currently out of action with a foot injury which has left the door ajar for Blackmore.

It remains touch and go whether Townend will make it back to full fitness in time to defend his title at Punchestown and his absence could leave trainer Willie Mullins in a bit of a quandary.

Should Townend fail to make Punchestown Mullins will be left in the unenviable position of king maker. Mullins is expected to train a double-figure number of winners across the five days of the season ending Festival.

The Champion trainer will feel obligated to his owners to use “the best available” riders in the absence of Townend which would certainly, in many instances, include Blackmore but at the same time he will want to remain loyal to his own stable jockey.

Blackmore will presumably keep the ride on the Mullins’ trained Allaho after their scintillating Cheltenham success, but outside of that it will be intriguing to see what other opportunities, if any, Mullins affords her in her bid to crown a historic season by landing the ultimate prize.

Finally, the unprecedented decision of the IHRB to suspend the licence of Galway-based trainer Stephen Mahon pending a referral hearing is the latest worrying development for the sport.

According to the IHRB issues came to light during an inspection of Mahon’s premises but, as yet, there are no further details of what exactly this relates to. One can only presume it is a very serious matter indeed for the IHRB to have taken such swift action.

Vincent Finegan's Latest Blog. Bolger back on the drugs bandwagon

Leading trainer Jim Bolger has spoken out publicly again about what he considers to be a serious issue of steroids being used within racing.