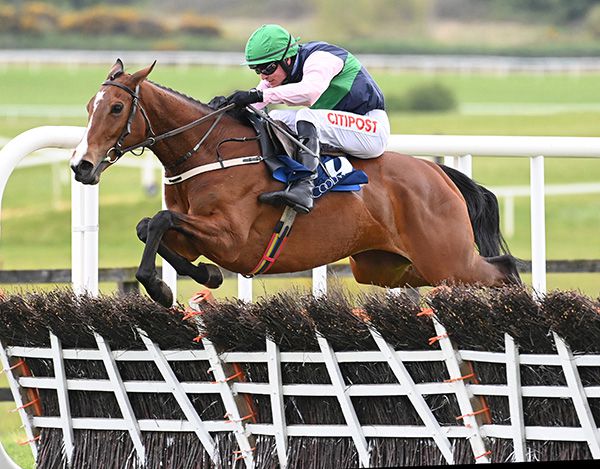 The seven year old mare won seven times for Mullins prior to then owner Jared Sullivan switching her to English trainer Paul Nicholls, but failed to win in four starts and Sullivan selling for £75,000 at Goffs UK sale in January.

Today Stormy Ireland followed up a Fairyhouse Grade 2 win last month when making all for jockey Mullins, who had won the half-hour earlier handicap chase with Mister Fogpatches.

Trainer Mullins later commented “she appears to have improved from Fairyhouse and it's a great day for Danny and a nice double for him.

“That mare surprised me, how much she has come on from that. We'll keep her in training, I don't think she's going to go to the breeding shed this year as she looks to have plenty left in the tank.

“I'm having second thoughts now about going chasing with her and maybe we could go back to the Flat with her.

“She's by Motivator and it might be a safer career option than going chasing. I don't think she's going to improver her pedigree by getting black-type over fences, she has enough over hurdles.

“If she could do something on the Flat that would be better for her.”

A winner on her previous start at Clonmel in June, Romella (12/1) followed up off a 7lb higher mark in the Athlone Handicap Hurdle.