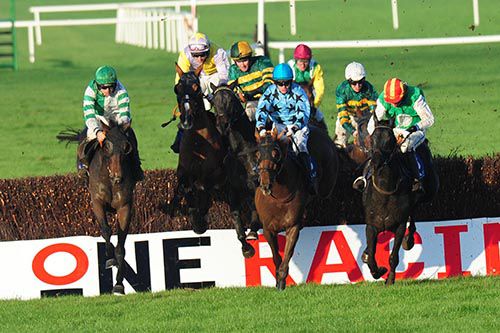 Kitten Rock stepped forward from his promising novice season to take the feature Fishery Lane Hurdle at Naas on his first run of the new campaign.

Fourth behind Abbyssial in Grade One company at Punchestown when last seen, the Edward O'Grady-trained four-year-old sat third for most of the way in the Grade Three contest and moved up menacingly on the turn into the straight.

Odds-on favourite Analifet found nothing in front and eventually trailed in last as Ruby Walsh drove Kitten Rock (7-2) clear to score by seven and a half lengths from Henry Higgins.

The jockey doubled up on Eric McNamara's top-weight Sir Harry Cash (5-1) in the Thoroughbred County Novice Handicap Chase, creeping into contention and then pulling out the stops to hold Top Cat Henry by a length and a quarter.

Real Steel (11-8) had smart form over hurdles last season and showed he could be a force to be reckoned with over the bigger obstacles as he put in a good round of jumping to take the Naas Annual Membership Beginners Chase.

Bryan Cooper had the Mouse Morris-trained six-year-old at the head of affairs for much of the way and he pulled well clear in company with the favourite Le Vent D'Antan before gradually getting the better of his rival to score by four and a half lengths.

Cooper doubled up in the Gigginstown colours in the Book Hospitality On Line Maiden Hurdle when Willie Mullins' 3-1 shot Killer Crow jumped the last better than favourite Fine Article and edged ahead to win by a length and three-quarters.

Gordon Elliott's 11-10 favourite Free Expression kept his unbeaten record in the www.naasracecourse.com Maiden Hurdle, leading on the run to the last under Mark Walsh and asserting by four and a half lengths, while the JP McManus colours were also carried to victory by exciting bumper scorer The Big Apple.

Robert Tyner put another one on the scoreboard when 13-8 favourite Leap Dearg travelled sweetly throughout for Eamonn Corbett in the Martinstown Opportunity Handicap Chase and eased clear to win by seven lengths.