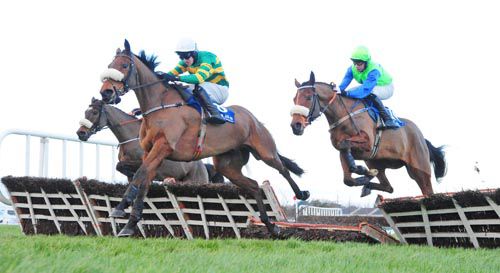 Kitten Rock completed a hat-trick in good style with victory in the Limestone Lad Hurdle at Naas.

Always to the fore under Mark Walsh, the 4-7 favourite was narrowly ahead on the home turn, though Glens Melody appeared to be travelling ominously well in behind.

The pair jumped the last in unison, but as Kitten Rock got away from the flight well, Glens Melody pecked on landing, handing the initiative to Edward O'Grady's charge, who went on to win by three and three-quarter lengths.

Walsh completed a double when A Grey Matter (5-2) boxed on well to land the Follow Naas On Facebook Handicap Hurdle for Martin Brassil.

Rule The World landed the Limestone Lad Hurdle last season, but he had to settle for second behind Wounded Warrior in the Woodlands Park 100 Club Novice Chase this time.

Noel Meade's 3-1 winner was one of four in line over the third-last, and though he made a mistake at the second-last, favourite Rule The World was also clumsy at it.

Paul Carberry got Wounded Warrior clear by the last fence, and he kept on well to win by nine and a half lengths.

Meade and Carberry collected a quick double when Russian Bill powered home late to land the INH Stallion Owners EBF Maiden Hurdle, the 13-8 favourite coming from an unlikely position at the last to beat Goulane Chosen by a length and a quarter.

Social Riser got off the mark at the third attempt over timber with an all-the-way success in the Book Hospitality On Line Maiden Hurdle.

Mikey Fogarty opened up a huge lead on the back straight, and though that advantage was diminishing by the last, Ken Condon's 5-2 chance kept on well to repel I'll Be Your Clown by five lengths.

Johnny Burke's persistence on Kilmurry Kid (4-1) paid dividends when he eventually got the measure of Heavenly Brook in the Cheltenham Trial Day 22nd February Handicap Chase.

David Mullins arrived full of running on Gordon Elliott's Tombstone (10-3) in the Tipper Road (Pro-Am) INH Flat Race and was always doing enough to hold the odds-on Potters Point in a one-two for Gigginstown.