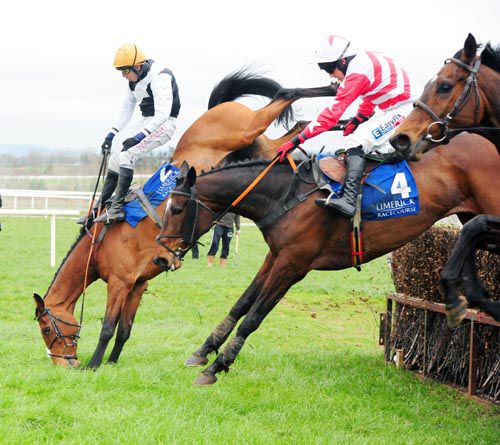 Lucy Wadham sent Baby Shine over from her Newmarket yard and the eight-year-old looked poised to win as she held the advantage at the final fence in the hands of Leighton Aspell, but she took a crashing fall.

Caoimhe's Delight had been making determined progress just behind and having been left in front, Sean O'Brien's 5-1 chance stayed on strongly under Davy Condon to beat Civena by a length and three-quarters.

Odds-on favourite Urticaire, representing the powerful Willie Mullins team, was in front at the final flight, but Adrian Heskin delivered a late run on Katie T (13-2) and she went past to score by half a length.

Urticaire's owners Gigginstown bounced back when the Charles Byrnes-trained Once And Always (11-2) travelled easily into the lead two out under Jody McGarvey in the www.limerickraces.ie Handicap Hurdle and kept going to score by five lengths.

Byrnes completed a double when classy hurdler Domination (evens favourite) took the Charleville Cheese Beginners Chase by two lengths under Gold Cup-winning jockey Davy Russell, who appeared to have the race in the bag when Ludo Et Emergo unseated at the last.

Edward O'Grady's Kitten Rock was sent off the 1-5 favourite for the Greenmount Park Event Centre Hurdle after winning easily on his jumps debut and there was never much doubt about the outcome as he led from halfway under Paddy Mangan to beat Irish Bulletin by seven lengths.

Sherika (8-1) and Hillman went on approaching the straight in the Adare Heritage Handicap Chase and there wasn't much between them all the way to the line as the former, trained by Harry Kelly, got home by half a length under Sean Flanagan.