Treacysenniscorthy a popular order at Tipp 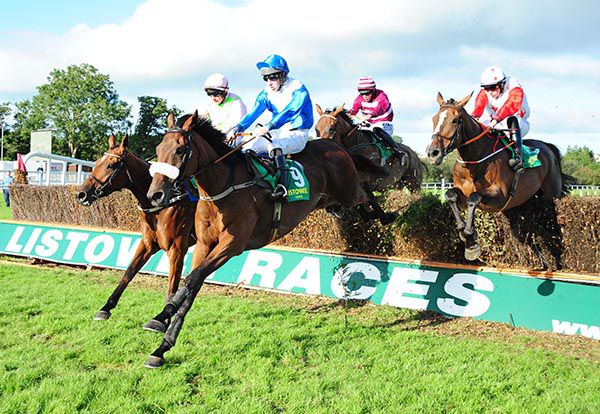 Treacysenniscorthy recorded a 50/1 shock at the Listowel Festival last month but won’t go off at anything like those odds when bidding to follow up at Tipperary this afternoon.

Recently licenced Robert Widger opened his training account when the seven-year-old took a beginners’ chase at the North Kerry venue and connections now switch back to the smaller obstacles in the Tipperary Races On Twitter Handicap Hurdle (3.05pm).

Davy Russell takes over in the saddle for this three-mile test, and early morning quotes of 4/1 have been cut to as short as 2/1.

Oh’herewego bids to land this prize for a second successive year and Val O’Brien’s charge is also proving popular at a general 11/4.

There are a number of odds-on favourites on this seven-race card with the Willie Mullins-trained Janidil quoted at around 4/7 for the opening Join Tipperary Supporters Club (C & G) Maiden Hurdle (2.05).

Daly Tiger is generally a 2/5 shot on his debut over fences in the www.tipperaryraces.ie Beginners Chase (3.35), while West Cork Wildway is all the rage in the bumper.

The dual point-to-point winner has been cut from 9/4 into 4/6 in the absence of Fortune Street, while the Karl Thornton-trained Shanroe Al C is a warm order at 13/8 as he seeks to complete a four-timer in the Tipperary Handicap Chase (4.35)