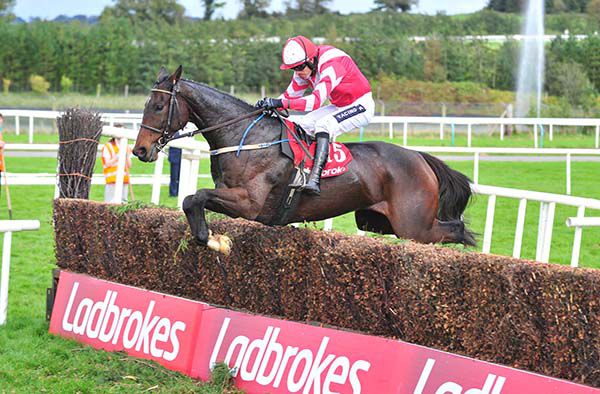 The betting suggested that Total Recall (2/1 favourite) would take a deal of beating as he began for Willie Mullins in the Grade A J T McNamara Ladbrokes Munster National Handicap Chase at Limerick. That's how it worked out — and how!

Alpha Des Obeaux ran a mighty race under top-weight but he was biting off more than he could chew to give a stone and two to Total Recall.

Formerly a point-to-point winner with the Neilans in Galway, and a three time scorer for the now-retired Sandra Hughes, Total Recall asserted from the second last in this three miler.

At the line the Westerner gelding, racing for the highly successful Slaneyville Syndicate, had an unflattering seven lengths in hand. Willie Mullins was doubling his tally at Greenmount Park after the win of Robin Des Foret in the 2.15.

"He travelled and jumped well and I suppose the runner-up (Alpha Des Obeaux) has run a blinder under top weight and we only had 10st5lbs on his back," said Walsh.

"He's a nice horse to get, he jumped super and was obviously well taught as a novice last year. He's a very loose horse, like an elastic band, and he has great use of himself and has great power.

"He had a great racing weight on his back which is a huge plus and I'd say the runner-up has run an unbelievable race with top weight on his first run for a while.

"I was lucky as there were a couple of fallers and a lot suffered interference but I was lucky to miss a good bit of that. He definitely got three miles and if you get into these type of handicaps with less than 10st7lbs, you've a huge chance and it's such an advantage.

"It's my second time winning the race after Dear Villez (2008) and it's great to win another big handicap with good prize-money."

The Stewards interviewed C.D. Meehan, rider of Rogue Angel, concerning his use of the whip in the closing stages of this race.

Evidence was heard from the rider concerned.

Having viewed a recording of the race and considered the evidence the Stewards found C.D. Meehan to be in breach of Regulation 10.3 (b) in that he used his whip unnecessarily after its chance of being placed was clearly gone.

Having considered his record in this regard, the Stewards cautioned C.D. Meehan regarding his future responsibilities.

B.J. Geraghty, rider of Slowmotion (FR) trained by Joseph Patrick O'Brien, reported to the Clerk of Scales that his mount never travelled and pulled up.