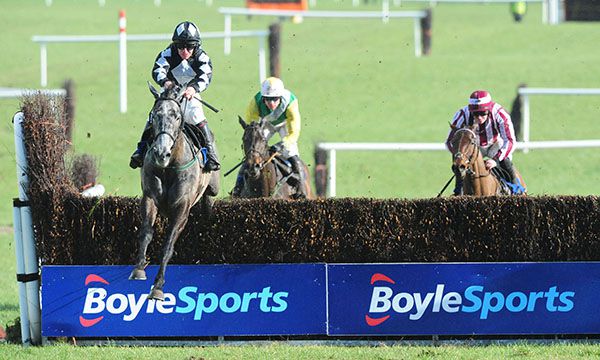 Tikkanen Express stuck on gamely to land the spoils for James Dullea in the two-mile handicap chase at Thurles.

Having gained a narrow lead five from the grey was joined over the third last and there were plenty in with chances jumping the penultimate fence.

The Tikkanen gelding found plenty for Phillip Enright going down to the last and held the late charge of Kitten Rock to gain a three-parts-of-a-length success.

2/1 favourite Mitchouka plugged on to finish third, a length-and-three-quarters further back.

The 10/1 winner had last been seen finishing fifth at Leopardstown over Christmas.

"He jumped unbelievable and Phillip said he got a flyer at the second last,” said Dullea.

“He has furious scope and thanks be to god I didn't see it because he'd give you a weakness when you'd see him taking off at the wings.

"We always thought there would be a big pot in him, we still think there is and it is great he won today.

"He might go for a Grade B chase at Leopardstown in early March over 2m5f. It was probably a bit too sharp today but the ground was tough work and his stamina came into play and he got away with the shorter trip."