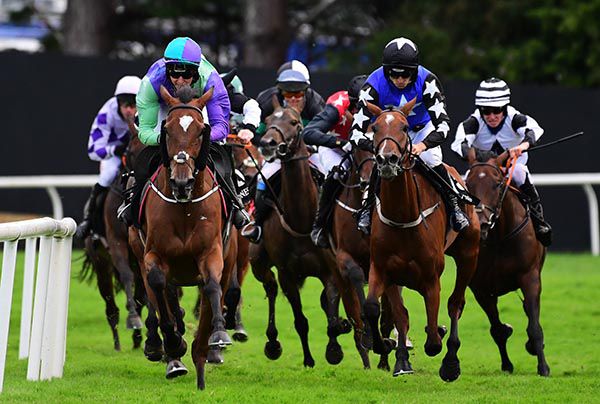 Earlier successful with Purple Mountain and Hallowed Star, The Gossiper completed a treble for the Mee's, who traditionally target the Galway Festival with their runners.

Successful in a bumper at Wexford in March, The Gossiper then disappointed at Aintree and Tipperary before bouncing back to form when successful at Down Royal in June.

Fitted with cheekpieces for the first time this evening, the Emmet Mullins trained six-year-old made all under Mike O'Connor and was ridden out in the final furlong, coming home seven lengths to the good.

Ashroe Diamond, who was sent off the 11/8 favourite, tried hard to reel-in the winner but she ultimately had to settle for second under Patrick Mullins for his father Willie.

Lahinch Three (13/2 to 4s), also trained by Emmet Mullins, completed the places another seven lengths back in third.

"He probably got an easy lead but thankfully he was good enough to take advantage of it," the winning trainer said.

"It didn't happen on the day for him at Aintree but he has done the job nicely today and he is a big strong type of horse who is something to look forward to over jumps.

"He'll go over jumps, he had two falls in point to points so hopefully we can get that ironed out.

"Lahinch Three closed in nicely in third and is a nice horse as well. That's only his second start so we might find another winners' bumper for him.

"Mike (O'Connor) had won on The Gossiper, Philip (Byrnes) had won on Lahinch Tree and Patrick (Mullins) had won on Sin A Bhfuil (unplaced) but wasn't available today so that was how the jockey booking came about."