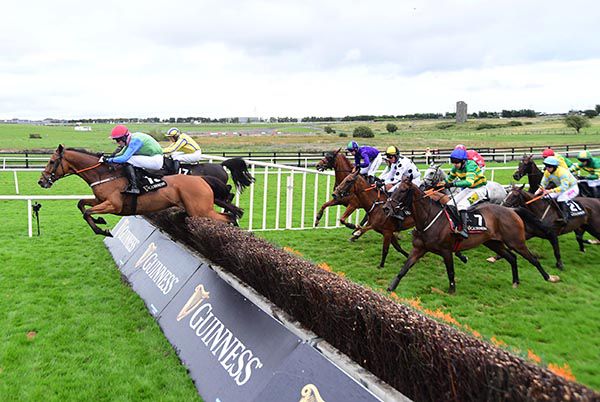 Born By The Sea leads over the last
© Photo Healy Racing

Placed twice from three starts at the festival twelve months ago, the son of Born To Sea won at Wetherby in the interim and finished tenth when tried on the level here on Monday.

Available at 25/1 in early shows, the seven-year-old gelding came in for plenty of market support and went off a just 10/1 under Jack Gilligan for his father Paul (trainer) and mother Natalie (owner).

Settled behind the leaders, the bay victor took closer order from four out and improved to lead from the second last.

He kicked a few lengths clear after the final fence and was ridden out on the run-in, coming home three-and-a-quarter lengths to the good.

Popong, who was sent off the 5/1 favourite, finished second under Hugh Morgan for Henry de Bromhead, while Aramax (18/1) and Funky Dady (11/2) were third and fourth respectively.

Dunvegan was still travelling well when badly hampered at the second last and he eventually finished ninth.

"We were lucky to win this race before with good old Barry Geraghty on Wellforth (in 2012) and this is magic," Paul Gilligan said.

"He ran Monday evening and we decided to leave the tongue-tie off him today. He is a mighty warrior, he owes us nothing and we bought him from John Bleahen, who is a good friend of mine. John sells good horses but unfortunately we can't afford to buy some of them - please God someone might come along and give us a better horse.

"He always runs a solid race and the Kerry National is a possible, why not. He had a fantastic run when third at Listowel in June.

"I'll dedicate the win to a good friend of ours Mandy Nolan who passed away and we were at her funeral before we came here. It was a sad day earlier watching Mandy going but this is fantastic.

"Today is a family day and days like today don't happen too often."

The Gilligan's were of course successful with Shanwalla on Wednesday.

The Irish Horseracing Regulatory Board Veterinary Officer reported to the Stewards that Uisce Beatha trained by Padraig Roche was found to have blood at both nostrils post race.

The Stewards interviewed H. Morgan, rider of Popong, concerning his use of the whip in the closing stages of this race. Evidence was heard from the rider concerned, who stated that his mount was finishing strong and responding to his efforts, but accepted that he was in breach of Regulation 10. Having viewed a recording of the race and considered the evidence, the Stewards were satisfied that H. Morgan was in breach of Regulation 10.3(g)(frequency) and having considered his record and pursuant to Regulation 10.6(a), they suspended him for 6 racedays.

The Stewards interviewed J.G. Gilligan, rider of Born By The Sea, concerning his use of the whip in the closing stages of this race. Evidence was heard from the rider concerned, who accepted that he was in breach of Regulation 10 and apologised for his actions. Having viewed a recording of the race and considered the evidence, the Stewards were satisfied that J.G. Gilligan was in breach of Regulation 10.3(g)(frequency) and having considered his record they suspended him for 2 racedays.