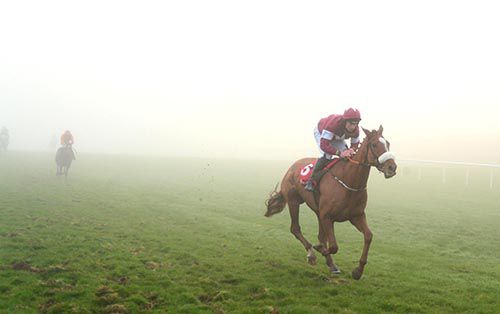 Samcro emerges from the fog in Punchestown
© Photo Healy Racing

Gordon Elliott's Samcro had a facile nine and a half length victory in the bumper at Punchestown.

The 4/9 favourite was settled in third by Jamie Codd as Arctic Light led from Carrigready.

The runners were completely enveloped by fog in the final half mile but when they reappeared well inside the final furlong Samcro had stretched clear of his six rivals.

Gordon Elliott said: “He’s a good horse. He won’t have much of it this year, maybe another bumper.

“He should be some horse down the road please God. He’s good.”

This gave Elliott and Gigginstown a double on the card as A Toi Phil also landed the Grade Two Florida Pearl Novice Chase.