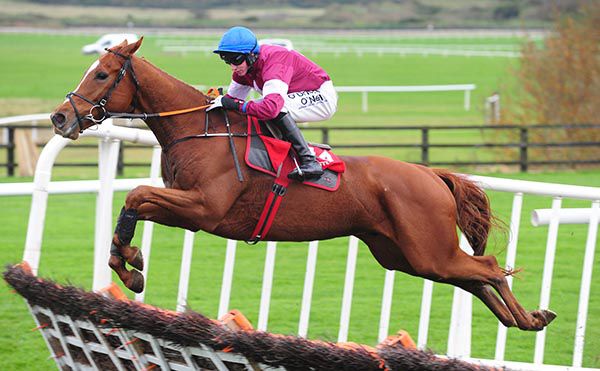 Samcro puts his unbeaten record and huge reputation on the line in the "Monksfield" Novice Hurdle at Navan.

The son of Germany cost Gigginstown House Stud an eyewatering £335,000 at the Goffs UK sale at Aintree in April of last year after winning his only point-to-point and while he has a long way to go if he is to repay that huge investment, he has made an impressive start.

Gordon Elliott's charge won three bumpers last season and having justified extremely cramped odds when making a perfect start to his hurdling career at Punchestown in mid-October, he steps up to two and a half miles for a Grade Three contest Elliott won for the third time in six years with Death Duty 12 months ago.

"He's a horse we think an awful lot of. Whatever he does this year is only going to be a bonus until he goes jumping fences," Elliott told Racing UK. "He's a very nice, exciting horse to have.

"He'll run in Navan and we'll make a plan from there."

Other contenders include Jessica Harrington's Jetz, the Willie Mullins-trained Good Thyne Tara and Half The Odds from Noel Meade's yard.