Oscar Knight jumps to it in feature 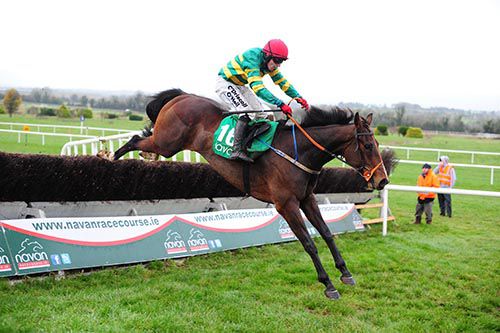 Oscar Knight recorded the third and by far the most important win of his career to-date when taking advantage of a light-weight in the €50,000 Foxrock Handicap Chase at Navan.

Tom Mullins’ charge has been let down by his jumping on a number of occasions in the past but avoided any serious errors here in this 2m4f event.

Mark Enright’s mount made good progress early in the straight, and took control after the second last.

The 7/1 chance (available at double those odds earlier in the day) stayed on well on the run-in to beat 4/1 joint favourite Ball d’Arc by six and a half lengths.

The other joint favourite Kitten Rock was one of a number to depart in the straight when falling three out, while King’s Wharf was in third place when falling at the last.

Mullins said, “He won well in Galway and had every chance in Punchestown when he nearly fell after jumping the fence well. Mark Walsh said he slipped on the next stride after the fence.

“I thought he would have run on after the last fence in Punchestown after making that mistake and when he didn’t I was saying is he gone out of form’.

“He was working well at home so we said we’d take a chance. There was no point going for a 50,000 race with a penalty so we said we’d come here instead of Punchestown tomorrow.

“I don’t know if that will get him into the Paddy Power, or even if JP or Frank want to go for it, but he’s in the race anyway so it’s there and I’ll leave it to the owner. If they want me to run I’ll run. I’m very happy with today.

“He jumped well enough bar a few down the far side. He has his own way of doing it and we do work on his back from time to time.”